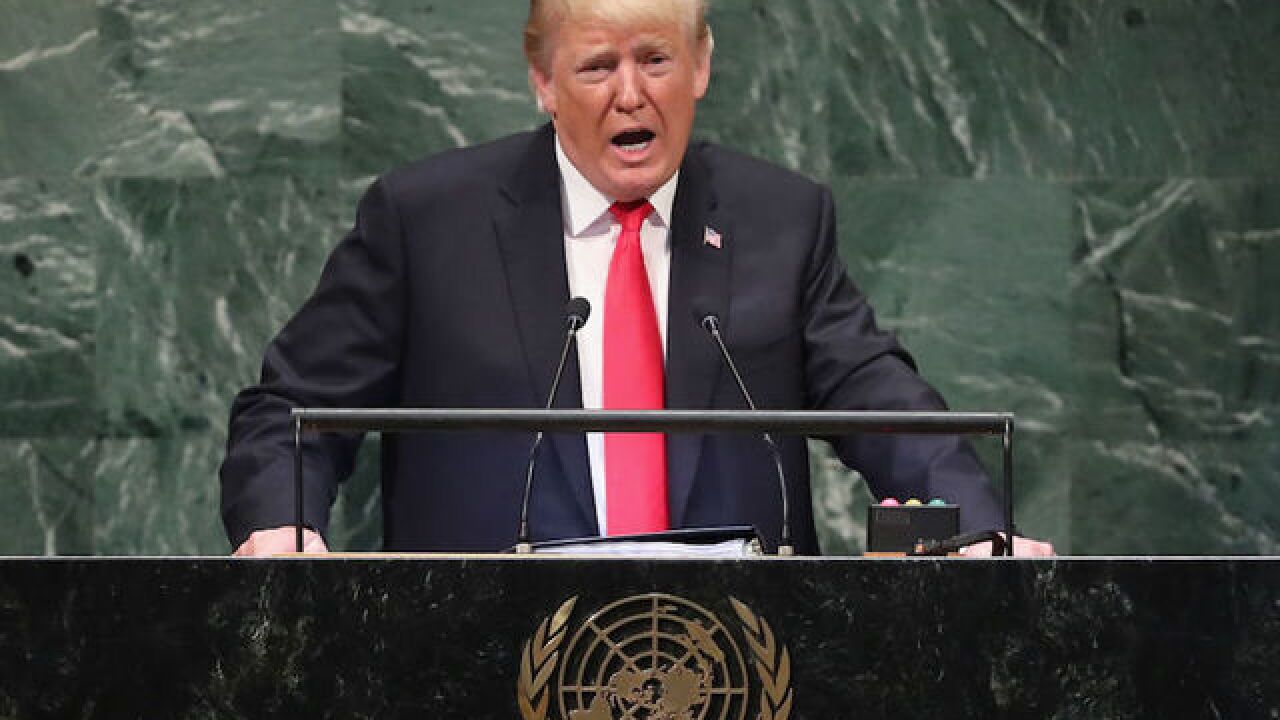 President Donald Trump stepped up to the iconic dais at the United Nations General Assembly on Tuesday and began his speech much as he would a campaign rally: by boasting that his administration "has accomplished more than almost any administration in the history of our country."

Many of the assembled world leaders and foreign dignitaries responded with laughter.

"I didn't expect that reaction, but that's OK," he said, laughing off the chuckles that rippled through the hall.

Trump's second-ever address to the international body served to reaffirm to a domestic political audience, just as much as to the world, Trump's continued commitment to the policies and convictions that he has unleashed on the world in the year since he last addressed the UN.

The President defended his hardline position on Iran and his trade war with China, touted his diplomatic engagement with North Korea and reaffirmed his rejection of globalism and the prominence of international institutions.

The speech showed that while Trump has accelerated the execution of world-rattling policies, his worldview remains consistent with the "America First" doctrine he first took to the world stage last year: proclaiming the world is best served if countries focus on their own self-interests and reject global governance mechanisms.

"We are standing up for America and for the American people and we are also standing up for the world. This is great news for our citizens and for peace-loving people everywhere," Trump said. "We will never surrender America's sovereignty to an unelected, unaccountable, global bureaucracy. America is governed by Americans. We reject the ideology of globalism and we embrace the doctrine of patriotism."

It remained equally clear that Trump's message is still not widely embraced by other countries; in contrast to past US presidents, his speech was not once interrupted by applause.

Beyond the international framework, Trump trained his fire on Tuesday on a handful of countries, most prominently China and Iran.

He touted his decision to withdraw from the "horrible" Iranian nuclear deal and urged other countries to join the US in ratcheting up economic pressure on Iran.

"Iran's leaders sow chaos, death and destruction. They do not respect their neighbors' borders or the sovereign rights of nations," Trump said, before slamming Iranian leaders of plundering "the nation's resources to enrich themselves and to spread mayhem across the Middle East and far beyond."

And even as he proclaimed his "great respect and affection" for Chinese President Xi Jinping, he singled out China as he leveled a broadside against "broken and bad trade deals" and a world trading system he called "in dire need of change."

"We will no longer tolerate such abuse," he said as he called out Chinese trade abuses and theft of US intellectual property. "We will not allow our workers to be victimized, our companies to be cheated."

An undercurrent of global unease has only grown in recent weeks as Trump slapped tariffs on another $200 billion in Chinese imports with promises to punch up if China retaliates, threatening to roil the global economy. And Trump's speech served only to reaffirm his ramrod posture.

Conspicuously absent from Trump's criticisms: Russia, whose hostile actions have been a focus of criticism from Western countries for years but with whom Trump has tried to foster better relations.

Trump's speech also came a year after he threatened to "totally destroy North Korea" if it endangered the US or its allies and dubbed the country's leader Kim Jong Un "Rocket Man."

On Tuesday -- calling Kim by his title, not the derisive nickname -- he spotlighted the progress the diplomatic engagement has yielded and thanked Kim "for his courage and the steps he has taken."

"We have engaged with North Korea to replace the specter of conflict with a bold and new push for peace," Trump said. "The missiles and rockets are no longer flying in every direction. Nuclear testing has stopped. Some military facilities are already being dismantled. Our hostages have been released. And, as promised, the remains of our fallen heroes are being returned home to lay at rest in American soil."

Trump's comments were a welcome change for many of the international diplomats in the room, who last year were shaken by Trump's menacing comments about Pyongyang. But Trump's assessment of the diplomatic détente with North Korea omitted the challenges that remain and the reality that North Korea continues to quietly develop nuclear weapons and has yet to take any concrete, verifiable steps toward denuclearization.

The overriding theme of "sovereignty" that carried through Trump's speech comes on the heels of several moves that have put that effort on display, including most recently a decision to cut funding for the UN agency that supports Palestinian refugees and a speech by his national security adviser John Bolton undercutting the International Criminal Court.

Bolton, a longtime and fiercely ideological critic of the UN and the former US ambassador to the body, left his imprint on the speech, working with the President's senior adviser Stephen Miller to write it.

"We, the people, are sovereign in America, so that infringements on our sovereignty are not infringements on abstractions or infringements on the government. They're an infringement on the people themselves," Bolton said on Monday. "And it's why we believe -- and of course, I'm speaking in secular terms here -- that the Constitution is the highest authority that we recognize. So in a number of different ways, the President's going to address this issue."

Addressing the sovereignty theme, Secretary of State Mike Pompeo also said Monday Trump would deliver "a recap about his call for every nation to do its part has paid dividends for the United States and the world over this past year."

US Ambassador to the UN Nikki Haley also said Trump would "lay down a marker" on foreign aid, remaining generous, but only "to those that share our values ... that want to work with us."