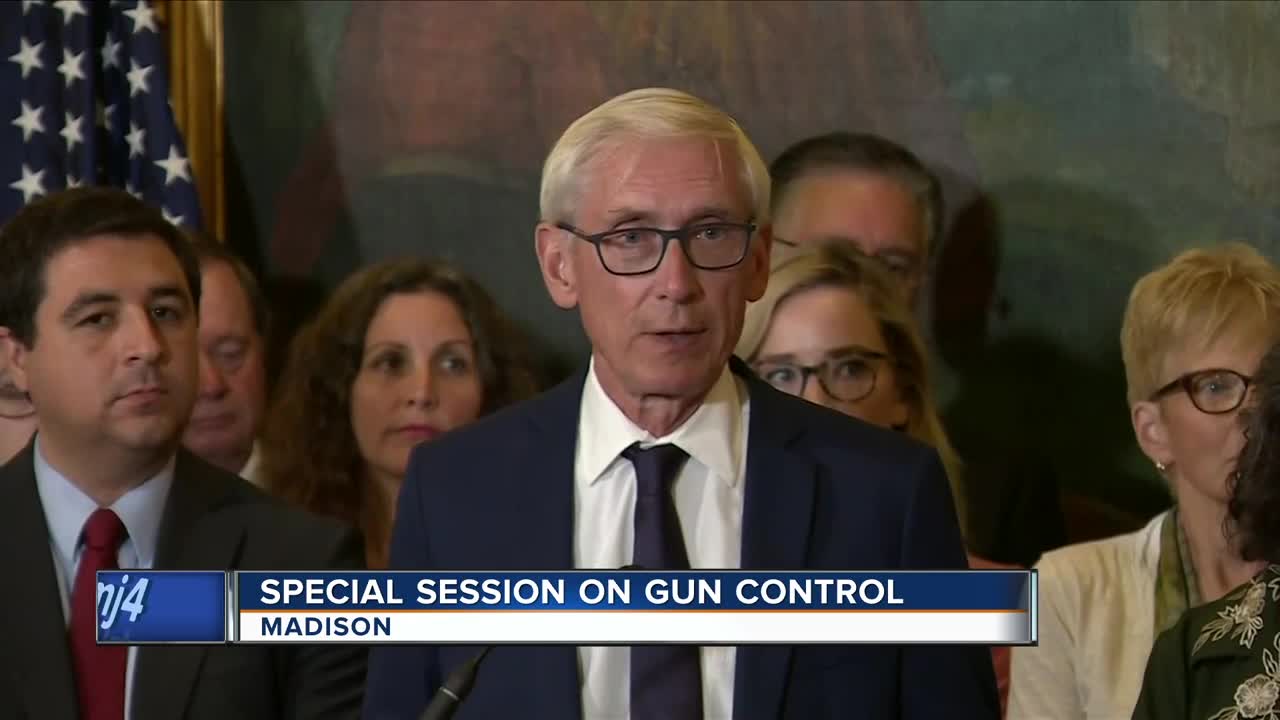 Wisconsin Republicans were poised to dodge the Democratic governor's call to pass a pair of gun control bills during a special session Thursday, brushing aside advocates' demands to take action before more people die.

MADISON — Wisconsin Republicans were poised to dodge the Democratic governor's call to pass a pair of gun control bills during a special session Thursday, brushing aside advocates' demands to take action before more people die.

A coalition of gun control groups and Democratic lawmakers held multiple news conferences and a rally ahead of the session to ramp up pressure on the GOP. But Republican legislative leaders stuck to their plan to convene the special session in the Senate and Assembly and then immediately adjourn both houses without taking up the bills. It was unclear when that would happen in either house as night fell Thursday evening.

Gov. Tony Evers last month ordered a special session for Thursday afternoon to address bills that would impose universal background checks on gun sales and establish a so-called red flag law in Wisconsin. Such laws allow family members and police to ask judges to temporarily seize firearms from people who may pose a threat.

Citing polls showing broad support for both ideas, Evers said Republicans will face blowback from voters at the next election over their inaction.

"If you refuse the people of this state a vote on these proposals, you are once again denying the will of the people, circumventing the democratic process, and refusing to do your jobs as elected officials," Evers wrote in a letter to Assembly Speaker Robin Vos and Senate Majority Leader Scott Fitzgerald on Thursday morning before the session began.

Democratic Assembly Minority Leader Gordon Hintz said Republicans should vote or risk losing power as in an election this week in Virginia, where gun violence was a major campaign issue.

"Failing to act on basic public safety measures is accepting there is nothing we can do to make our communities safer," Hintz said. "We cannot sit back and do nothing. We have a responsibility to act. ... The issue's not going away. We shouldn't have to wait for the next mass shooting to get more attention on it."

Gun control advocates including Moms Demand Action, Doctors for America and the Episcopal Diocese of Milwaukee rallied at the Capitol.

"We go to school every day wondering if we will be next," Karly Scholz, a junior at Madison West High School and the director of the Wisconsin chapter of March for Our Lives, said at a news conference before the rally. March for Our Lives is an anti-gun group that formed after the school shooting in Parkland, Florida.

"When lawmakers say they won't even debate this issue, I'm being told that my life doesn't matter, that my safety doesn't matter," Scholz said. "When the young people you refuse to protect turn 18, we will vote you out."

Assembly Democrats planned to force debate on gun issues during discussion on a bill Republicans support that's up for a vote related to reducing suicide. They argue that a red flag law does more to curb suicides than other measures the Assembly is debating.

"This problem isn't going to go away because the Legislature ignores it," Kaul said.

But Fitzgerald and Vos insist both proposals infringe on Second Amendment gun rights. Vos said he opposed the red flag law because it would allow for confiscation of weapons if there's a suspicion someone may do something wrong.

"Even when you yell fire in a crowded theater, it happens first and you're prosecuted after," Vos said. "I don't understand those who would want to take away our constitutional rights on an idea or a threat." He said a Republican-sponsored bill that would make grants available to gun shop owners to store guns from people who voluntarily give them up is less invasive than the red flag proposal.

Fitzgerald, for his part, has said it makes no sense to debate bills that won't pass without Republican support.

Despite all the warnings that Republicans will pay at the ballot box for ignoring the special session call, it's unlikely they'll suffer much damage in 2020.

The GOP redrew legislative district lines in 2011 to consolidate its support, leaving only a handful of truly competitive seats. As a result, Republican incumbents are less concerned about Democrats than they are about primary opponents who might appear more conservative than them. Gun rights are a basic plank in the Republican platform; any show of support for the special session bills or Evers would almost certainly invite such a challenge.

Evers almost certainly understands these dynamics but calling a special session on guns is still important to his base and gives him a chance to remind voters where each party stands.