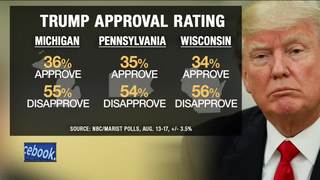 WASHINGTON – President Donald Trump’s approval rating has fallen below 40 percent in three key battleground states, including Wisconsin, that were key to his election - according to a trio of NBC News/Marist polls.
These three polls were conducted between August 13-17, following the Charlottesville violence.
In Wisconsin, 34 percent of voters approve of Trump (17 percent strongly), compared with 56 percent who disapprove (42 percent strongly).
In Michigan, 36 percent of voters approve of Trump’s job performance (including 19 percent who strongly approve), while 55 percent disapprove (including 40 percent who strongly do).
In Pennsylvania, 35 percent give the president’s job a thumbs up (17 percent strongly), versus 54 percent who disapprove (41 percent strongly).
During the 2016 general election, Trump won all three states by a combined 80,000 votes, becoming the first Republican to carry these states since the 1980s.
When voters were asked if the President's conduct made them proud or embarrassed, 64 percent of those polled in Wisconsin and Michigan say they've been embarrassed. Sixty-three percent felt this way in Pennsylvania.
President Trump received higher marks on the economy in all three states. According to the poll, Michigan voters by a 42-to-39 percent margin say the U.S. economy has been strengthened by Trump’s decisions as president. In Pennsylvania, it’s 45 percent to 38 percent. And in Wisconsin, it’s dead even at 41 percent each.
To read more about this poll, click here.
Copyright 2016 Scripps Media, Inc. All rights reserved. This material may not be published, broadcast, rewritten, or redistributed.