Stolen car crashes into home on Milwaukee's northwest side

MILWAUKEE -- Milwaukee police are looking for several people who crashed a stolen car into a house and ran off. It happened Monday morning on Milwaukee's northwest side.

The homeowner, near 68th and Silver Spring, said she was inside her house at the time, thankfully she wasn't hurt. She told TODAY'S TMJ4 she heard a loud boom from her kitchen as a car plowed halfway into her living room.

"It shocked me," said the homeowner's son Gary Bohlmann. "I got a call, mom said that a car ran into her house, come on over and get over here quick." 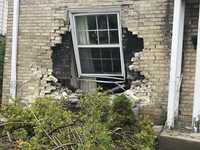 Bohlmann could hardly believe it until he saw the gaping hole through the brick siding himself.

Bohlmann's mother has lived in the home for the past half century and thought it was built to last. Now it's in need of extensive structural repairs.

"I'm just glad the people inside the house are OK," said Navarus Campbell.

Campbell also rushed over, but for other reasons.

"My brother woke up and said the car was gone," He said.

It didn't take long for Campbell to realize it was his car that was smashed into the home. Campbell said his Chevy Impala was stolen from his home less than half a mile away just hours before the wreck.

"I worked so hard for this, I just got it," he said. "Please stop stealing cars, it's not nice. People work hard for what they have."

While police search for the suspects who ran off after the crash. Campbell finds himself looking for a new vehicle as his is likely totaled.

Anyone with information on the suspects or their whereabouts is asked to call Milwaukee police.