The governor will have to appoint a replacement 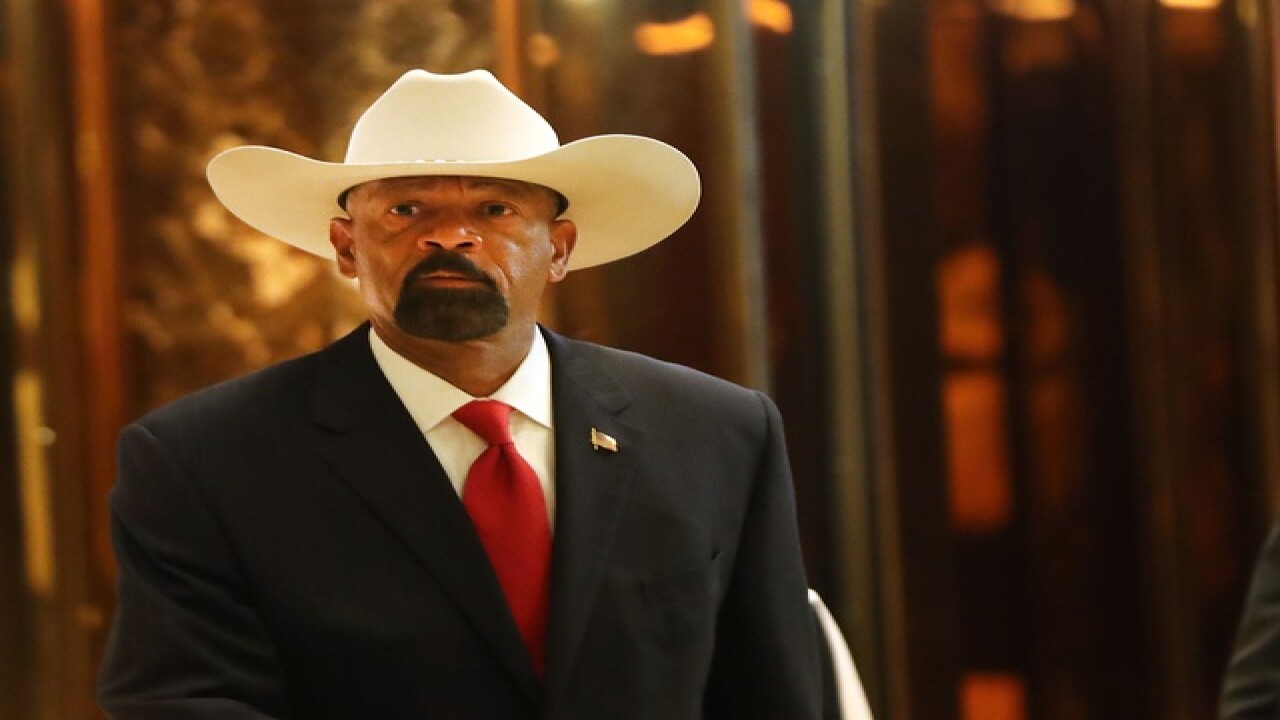 MILWAUKEE -- Milwaukee County Sheriff David Clarke is leaving his position as sheriff to serve in President Donald Trump's Department of Homeland Security, according to a report from WISN-AM.

The news was confirmed by Sheriff Clarke himself on Vicki McKenna's radio show Wednesday afternoon:

Confirmed in an exclusive interview on my show, @SheriffClarke will leave his position as Milwaukee County Sheriff for a position at DHS.

A spokesman for Clarke said the sheriff was in Washington D.C. Wednesday and was asked to join President Donald Trump’s administration awhile ago.

As soon as the day after Election Day last November, Sheriff Clarke's name had already been floated as someone who might be a good fit for Homeland Security. He also was briefly considered by some as a replacement for fired FBI Director James Comey.

No stranger to controversy, Clarke's appointment is likely to thrust him further into the spotlight, and bring back to the surface stories about his role and responsibility in the four deaths inside the jail he supervises ; as well as more minor crusades like his social media war against a Milwaukee man who filed a complaint against him.

Meanwhile, local officials aren't surprised at the news of his appointment.

"I would be lying if I didn't say that I'm going to be happy to have a new sheriff," said Milwaukee Mayor Tom Barrett.

"He has a great presence, but he's been pretty disastrous for the county," said Milwaukee County Supervisor Jason Haas.

Haas is referring to the jail death investigations, the ethics investigation stemming from an encounter Clarke had on an airplane with a constituent and budget concerns.  Many supervisors are curious who Gov. Scott Walker will choose to fill Clarke's position.

"I hope it's somebody who's better qualified in management and running things effectively and that will cost us a lot less money.  Less lawsuits will be a great thing," Haas said.

"I'm hoping that if when there is a new sheriff that we will have a better relationship," said Milwaukee County Supervisor Supreme Moore Omokunde.

Omokunde called on the sheriff to resign in December.

"He owes us an explanation for what happened in his jails before he skirts off to skips off to D.C.," Omokunde said.

A spokesman for Clarke said the sheriff will work in the DHS Office of Partnership and Engagement where he'll be a liaison for local and state governments and law enforcement agencies.

"I find some irony in that Sheriff Clarke is going to a position where his job is to work with local units of government," Barrett said.  "I think that a decision was made clearly that he should not require confirmation by the United States Senate because I think that that would be very difficult to achieve given what's going on with the investigations at the Milwaukee County Jail."

Walker will make an appointment to replace Clarke, but not before he receives a letter of resignation from the sheriff.

"We then notice it.  We accept applications.  It's typically a two week process that the opening occurs.  We have a panel that includes both state and when it comes to the sheriff we include law enforcement professionals as part of the committee that looks through applicants and finally gives me a list of finalists to interview.  So it'll be awhile, but the first thing we need before we can do anything is a letter of resignation," the governor said.

Former Milwaukee Police Captain and Head of Security for Major League Baseball Earnell Lucas hopes to become Milwaukee's Interim Sheriff.  He said he'll submit his name to the governor to fill the remainder of the term.  In a statement Lucas said, "It would be an honor to be selected and I believe that I am the right person to fill this critical role."

Despite all the local reaction, the Department of Homeland Security tried to pump the brakes on the story, saying that nothing is official yet.

"The position mentioned is a Secretarial appointment. Such senior positions are announced by the Department when made official by the Secretary.  No such announcement with regard to the Office of Public Engagement has been made," said a department spokesperson.

Clarke was first appointed to the position of Milwaukee sheriff by then-Wisconsin Governor Scott McCallum in 2002. He subsequently won re-election in 2006, 2010, and most recently in 2014.

The TMJ4 newsroom received an overwhelming response from Democratic representatives and groups following Clarke's announcement.  Portions from some of their statements are below:

"While Sheriff Clarke's departure is good news for Milwaukee County, it affirms the 45th President's lack of clear judgment and regard for the safety of our nation and its people...." said Wisconsin State Senator Lena Taylor.

"In his time as Milwaukee County Sheriff, David Clarke had 4 inmates die under his supervision, repeatedly made inappropriate and incendiary comments, promoted violence, and used threats and intimidation against innocent citizens. How could anyone possibly think that this would be a good candidate for any position in Homeland Security, let alone the Assistant Secretary?....” said State Representative David Crowley.

"The announcement that failed Milwaukee County Sheriff David Clarke is taking a bureaucratic job at a department within a department of the Republican Trump administration is proof that no amount of failure will stop the Republican President from rewarding devout loyalty…” said Representative David Bowen.

"The public safety of our local communities and our nation isn't a joke, a game, or a popularity contest - but that's exactly how Sheriff David Clarke has treated his role over the past few months...." said Democratic Party of Wisconsin.

"Clarke is unfit for any office and should face criminal charges for the deaths and abuses at the jail. Trump's appointment of Clarke shows this administration's disregard for human rights...." said Voces de la Frontera Executive Director Christine Neumann-Ortiz.

The person Clarke would replace tweeted this today:

I'm being replaced @DHSgov by #SheriffClarke. My job was to work with state and local officials. Clarke says he wants to strangle #Democrats