Peter Weslow with Milwaukee’s Service First Staffing said companies who drug test in Southeast Wisconsin are missing out on at least 20 percent of the workforce, which these days is already tight.

Peter Weslow with Milwaukee’s Service First Staffing said companies who drug test in Southeast Wisconsin are missing out on at least 20 percent of the workforce, which these days is already tight.

“You’ve got companies that are dying for workers, but then there’s a pool of people that want to work but aren’t able to get jobs,” Weslow said.

Doing away with pre-employment drug testing Weslow believes is a solution to the worker shortage in Wisconsin, specifically for jobs where accidents are less likely to happen like clerical positions.

Story I'm working on tonight:
Do you think employers should get rid of pre-employment drug screening?

“There’s a pool of workers that can’t pass drug tests, whether it’s THC, whether they have medical reasons to use it, they should be allowed to have opportunities for employment,” Weslow continued.

Laurie Greenlees with an employer association company, MRA - The Management Association, said her company recently conducted a poll of employers in Southeast Wisconsin. It asked companies if they discontinued marijuana from their drug screening process. Seventy-three percent said “no” one percent said “yes.” 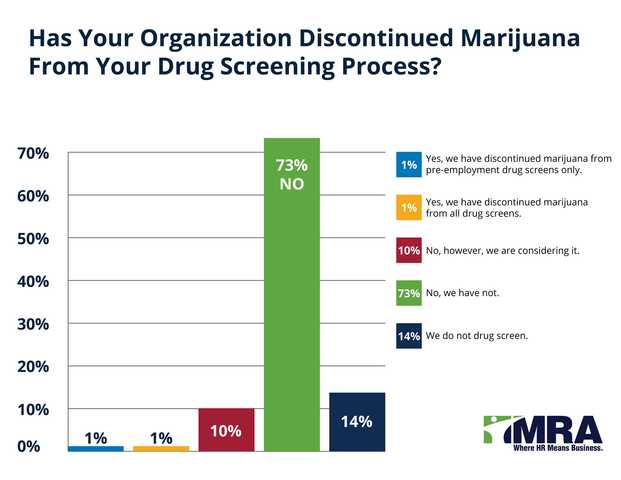 “I would never recommend removing the pre-employment drug screen from any position that is a safety-sensitive position, so these are positions where people are regularly operating a vehicle through the course of their employment or heavy equipment or machinery,” said Greenlees.

Weslow absolutely agrees. But he thinks certain labor fields should explore the idea to tap into a bigger pool of employees.

Service First Staffing has six locations in the state, and Weslow said while his employer clients are interested in the possibility of dropping the drug-screening, no one is ready just yet.

“It’s kind of like that roadblock nobody wants to be the first one to jump in the pool,” said Weslow.