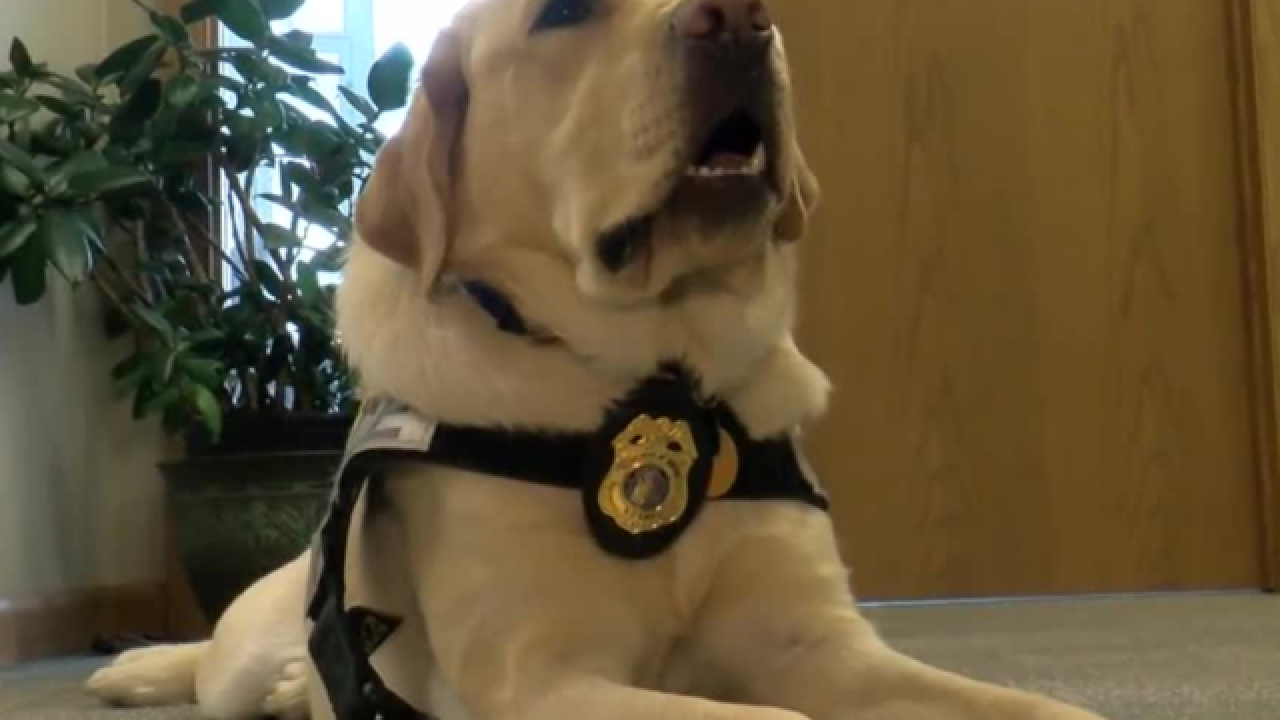 The Wisconsin Department of Justice's Special Agent, Kozak, has been on the job for two and a half months.

During that short time, he's accomplished a lot more than any human is capable of. Yes, that's right, Kozak is a four-legged Special Agent.

He is one of 30 dogs nationwide trained to smell a chemical compound found inside of them all. To put it simply, he can smell a glue that humans can't.

"It's an adhesive that's used in the motherboards of electronic devices that contain storage," said Special Agent, Joe Mech, who heads out the DOJ's Internet Crimes Against Children division.

Mech explained why this canine's job is so essential.

Mech said criminals try to hide the electronic evidence in their homes and sometimes human investigators will overlook them. Kozak sits and huffs when he locates any electronic storage device.

But Kozak also works on homicide or drug cases, and missing persons cases too, anything where electronic storage units are involved.

He is deployed all over the state of Wisconsin. Recently, Kozak helped search Jayme Closs' home in Barron County. Mech said he believed he recovered a tablet in that search.

Mech said it's too early to tell if the evidence he recovered will help in the cases.

So how did the DOJ end up having a dog like this? Kozak's handler, Special Agent Tami Pawlak said the department has this canine all because of a woman from Pittsburgh, Alicia Kozakiewicz.

When she was 13-years-old, a man kidnapped Kozakiewicz and held her hostage, posting videos of her abuse online. Now 30 years old, Kozakiewicz raises awareness about child sexual exploitation online.

Alicia's Law passed in many states, including Wisconsin. Money from it provides funding for dogs like Kozak, which can be very expensive. The initial cost of Kozak and his training totals $11,000.

The DOJ said initial funding from Alicia's Law was $1 million.  An additional $1.5 million was granted for this current biennium.

"1,000 predators have been arrested in the last two years since Alicia's Law has passed," said Kozakiewicz.

In case you are wondering, yes, Kozak, is named after Kozakiewicz.

"Alicia is a warrior, so it was an honor to be able to name our dog after her," said Special Agent Pawlak.

One day, Alicia and Kozak hope to meet.

"He's going to help so many lives and put so many bad people away," said Kozakiewicz

Kozak is the only dog in Wisconsin doing this type of work. As of right now, the DOJ doesn't have any plans to bring another on board.

In the meantime, Kozak found his niche. Pawlak said he was initially trained as a citizen service dog, but because he was so hyper, he flunked out of his course.

Another trainer got a hold of him and his high energy and motivation for food made him a perfect fit for his new role.