A run to the mailbox ends in shock for one Wauwatosa couple after a neighbor threatens to kill the family's pet.

WAUWATOSA - A run to the mailbox ends in shock for one Wauwatosa couple after a neighbor threatens to kill the family’s pet.

“Just because she’s a barker. I didn’t get it, at all," Dianna Salas said. 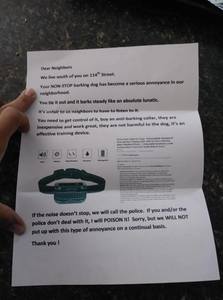 An eight lbs dog named Zelda who’s bark might actually be bigger than her bite is now the subject of a cryptic letter Dianna Salas and her family received in the mail Friday.

"When I opened it up, there was this letter threatening my dog’s life," Salas said.

The letter reads in part —
“Your non-stop barking dog has become a serious annoyance in our neighborhood.”
“If you and/or the police don’t deal with it, I will poison it!”

“I had a bit of anger in me [after I read it]. She’s like my child. She’s annoying just like the rest of them. She’s a barker, she’s inside, outside, she’ll bark," Salas said.

“A gruesome threat of poisoning someone’s pet right after saying if the cops don’t do nothing. They’ll take it in their own hands, that’s just wrong," Struble said.

Not only did Struble share the threat to Facebook, but he and Salas also filed a police report —and although the person who wrote the letter says they’re a neighbor just south of the couple on 114th Street —Struble and Salas said they have not idea who’s behind it.