Bishop Hines had a seat at the table among other influential black leaders across America.

“This is probably going to be the most pro-black president that we've had in our lifetime," Rev. Darrell Scott said, a pastor from Ohio. His statement is causing a firestorm.

“It is ridiculous, and this is a little scary because I don't stay in Milwaukee, I stay on the outside of Milwaukee and I knew this was coming," a caller said on Homer Blow’s radio show.

“Well it's obvious that he's basically trying to put himself in position to reap whatever benefits that trump and his administration is offering to certain people that help his cause," Franklin said.

Bishop Hines wasn't available to speak on Monday, but released a statement saying in part that it's "necessary to be at the table to foster these changes."

WNOV Radio Host Jermaine Reed says Hines has received some support on his show, but mostly from his church members.

Other listeners wonder why he's qualified to speak on Milwaukee prison reform.

“That has been the biggest concern that we're hearing is that folks say bishop Hines isn't personable, he's not in the trenches, people don't see him taking up these social justice issues," Reed said.

Church members say Hines explained his visit to trump in Sunday’s sermon. If you'd like to read his full statement it’s below. 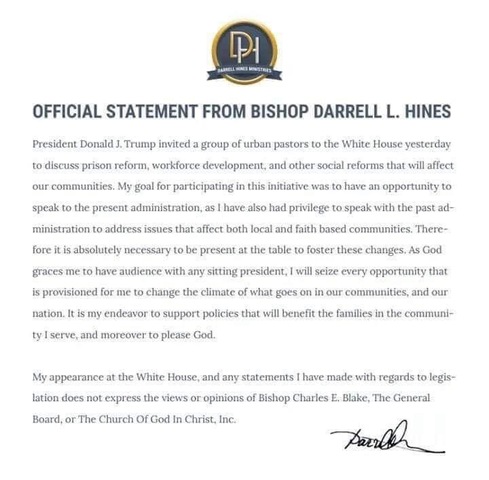