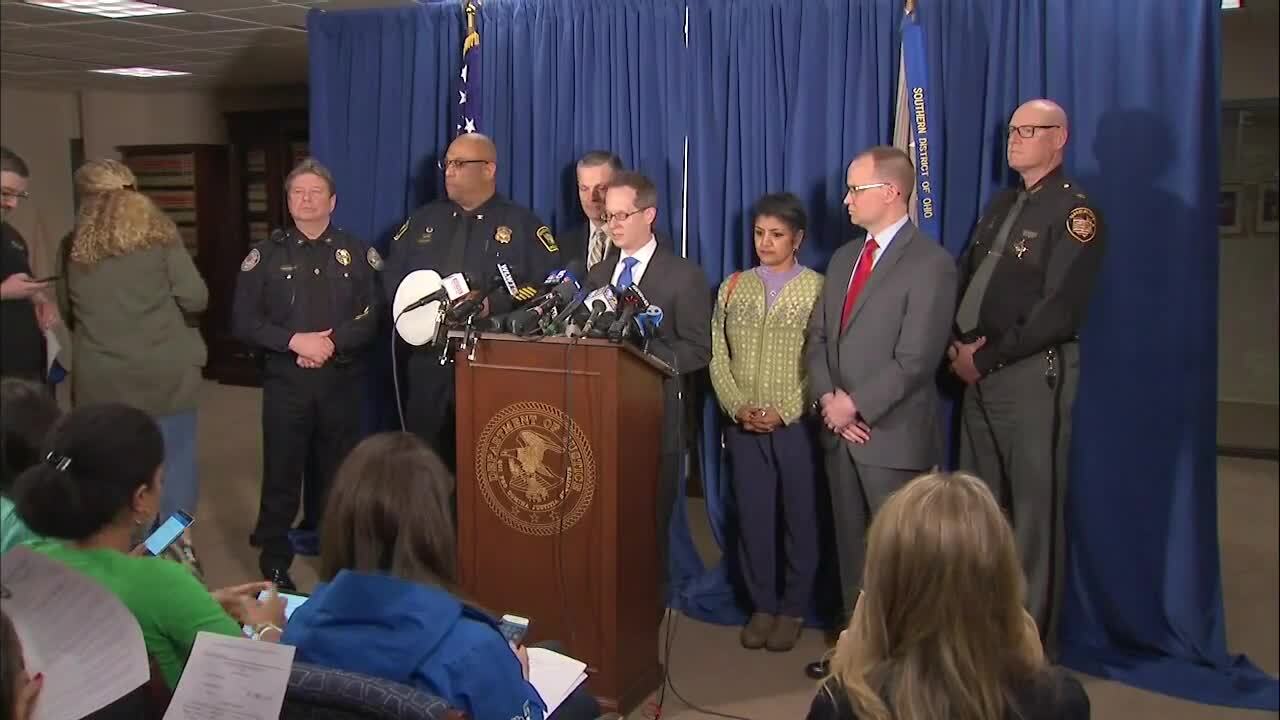 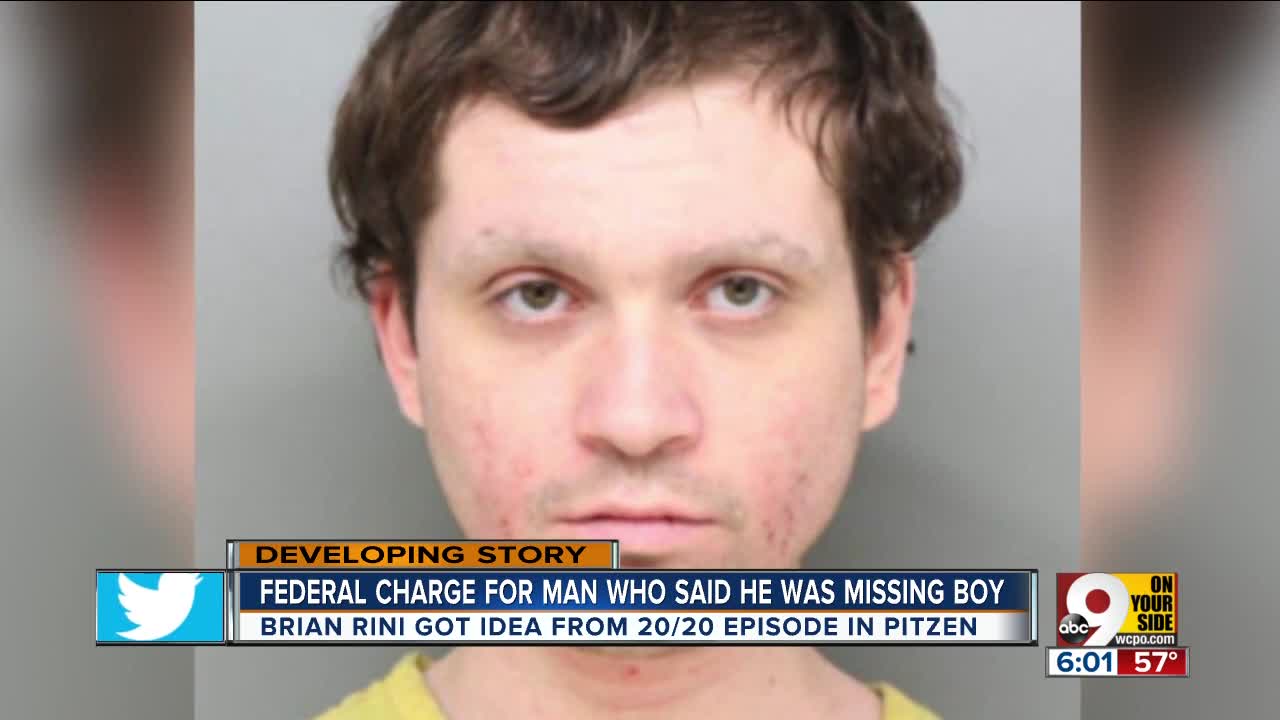 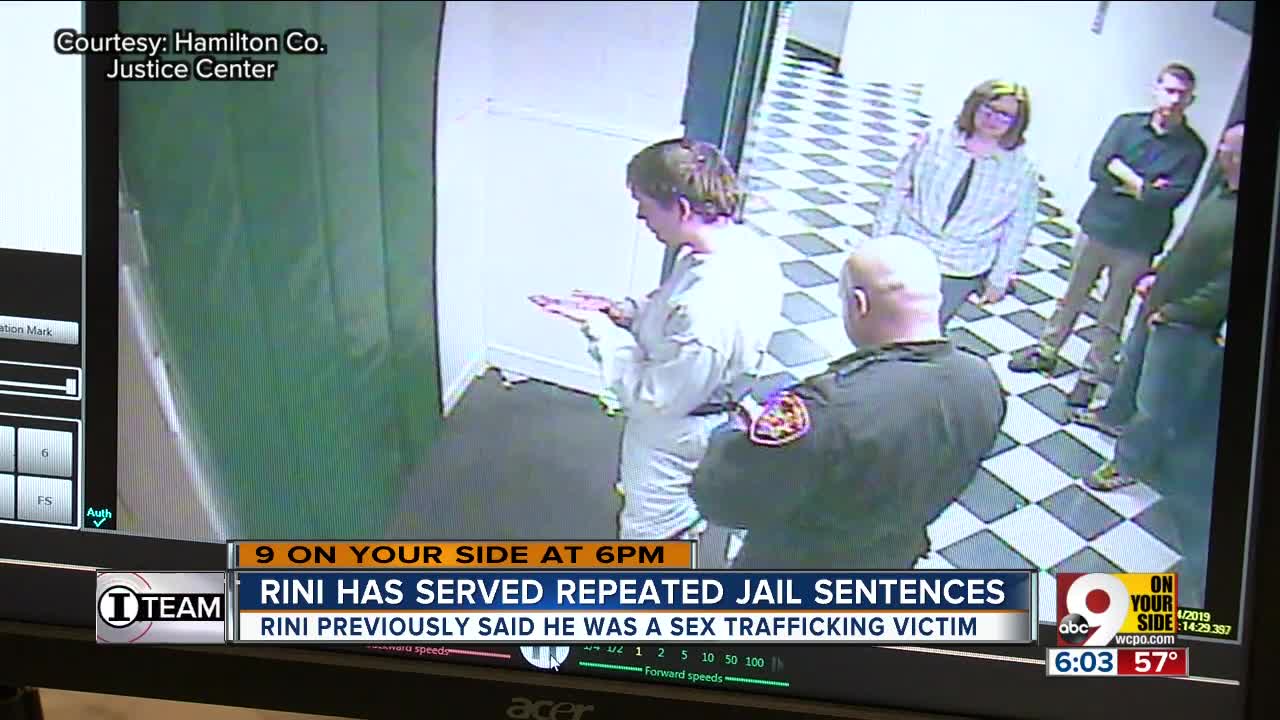 CINCINNATI — The 23-year-old man who falsely claimed to be an abducted 14-year-old from Illinois has twice before made bogus claims about being a juvenile sex trafficking victim and only admitted to the hoax this time after being confronted with the results of a DNA test, the FBI said.

Brian Michael Rini has been charged by the FBI with making false statements, authorities announced Friday.

"False reports like this one can be painful to the families of missing children and also divert law enforcement resources in order to investigate these untruthful claims," Herb Stapleton, the acting special agent in charge of the FBI Cincinnati said. "Law enforcement takes dishonest reports very seriously ... and we caution that people making false claims can and will face criminal penalties."

According to an affidavit filed in federal court, Rini said his name was Timmothy Pitzen, he'd been abducted when he was 6 years old and he just wanted to go home. After Newport, Kentucky officers made contact with him Wednesday, Rini complained of abdominal pain and was driven to Cincinnati Children's Hospital Medical Center.

During an interview with a Cincinnati police detective and FBI task force officer at the hospital, Rini still claimed to be 14-year-old Timmothy Pitzen, according to the affidavit. He also claimed he'd recently escaped from a hotel room where two men had been holding him captive, and that he'd been sexually and physically abused while in captivity.

Rini refused to provide his fingerprints, and Stapleton said investigators were "skeptical" of his claims. However, he agreed to a swab for DNA testing. The Hamilton County Coroner's Office collected the sample, and Coroner Lakshmi Sammarco said it was not a match for Timmothy. To test the DNA, the Bureau of Criminal Investigation put the information in, and officials confirmed Thursday afternoon that it was not a match, Sammarco said. DNA analysts had a known sample from Pitzen’s parents, which was already in the FBI’s system.

Even after being read his Miranda warnings, Rini continued to claim he was Pitzen, according to the detective. It was only after authorities confronted him with the DNA test results that Rini admitted he wasn't Pitzen. He said he'd watched a story about Timmothy on ABC's "20/20," and that he wanted to get away from his own family. Rini had seen a re-run of the episode a few weeks ago, according to U.S. Attorney Benjamin Glassman.

Rini told investigators that he wished he had a father like Timmothy's, because if he had gone missing, he said, his own father would just keep drinking, according to the affidavit.

The FBI discovered that Rini had twice before claimed to be a juvenile sex trafficking victim, and had been identified in those cases after he was fingerprinted.

Rini made an initial appearance in U.S. district court at 11 a.m. Friday, Glassman said. He's being held without bond and has a detention hearing scheduled for Tuesday.

Glassman said false claims like this waste law enforcement resources and cause pain for the family.

"It is not OK to make false claims to law enforcement about serious matters like this," he said.

James “Robert” Brown Jr., special agent in charge of the Louisville Field Office, estimated that over 50 law enforcement and public health officials were involved in the case.

Glassman said Rini's previous claims about being a juvenile sex trafficking victim were made to law enforcement in northern Ohio, but he declined to go into further detail.

As of 12:20 p.m. Friday, Rini was in the custody of a U.S. Marshall, Glassman said. If convicted, Rini could spend up to eight years in federal prison.

In the meantime, the real Timmothy Pitzen remains missing.

"On behalf of the United States, my heart goes out to the family of Timmothy Pitzen," Glassman said. "I can only imagine the kind of pain that they have been through and this episode has caused them."

Timmothy's mother, Amy Fry-Pitzen, picked him up early from kindergarten in May of 2011. She drove him hundreds of miles, and they visited a zoo and a water park. Timmothy, then 6, was last seen as they checked out of a resort in the Wisconsin Dells.

Fry-Pitzen was later found dead of apparent suicide in a Rockford, Illinois hotel room. She left a note stating that Timmothy was with someone who would love him and care for him, but also that he would never be found.

Aurora police have released a photo of Timmothy and an edited photo from the National Center for Missing and Exploited Children showing what he may look like:

Read the complaint against Rini and an investigator's affidavit below: