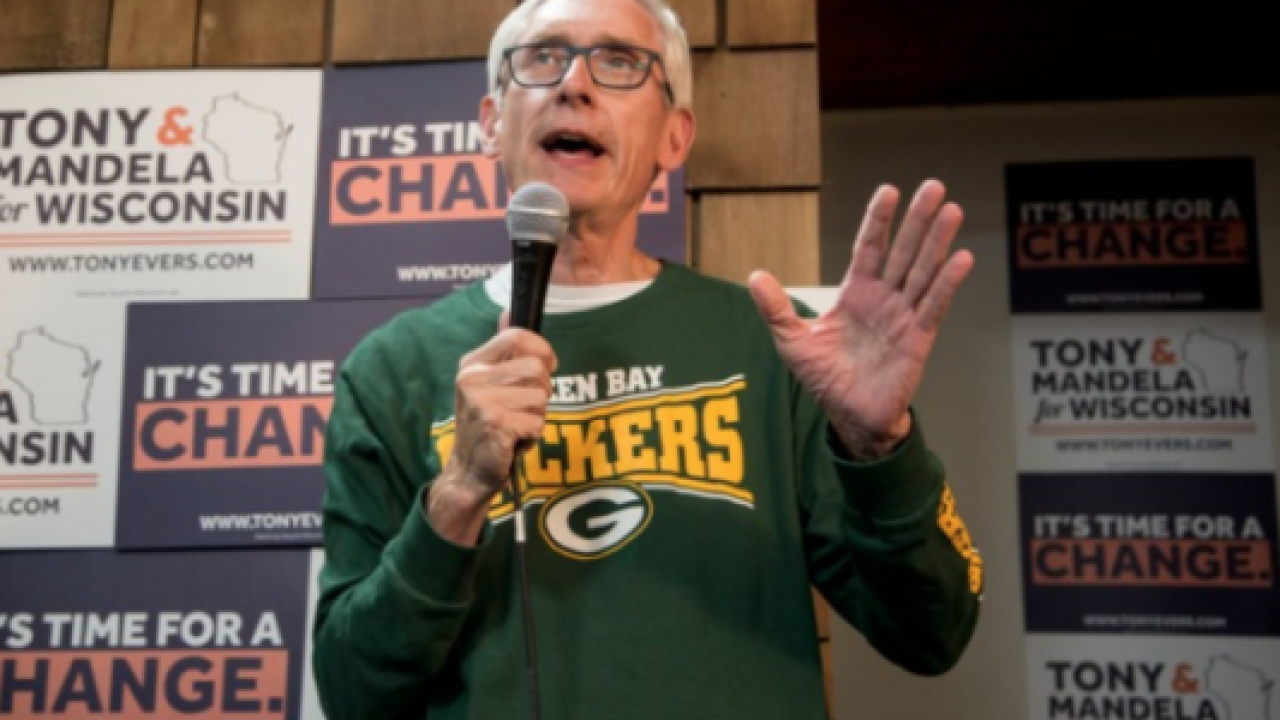 MADISON, Wis. (AP) -- Democratic Gov.-elect Tony Evers said in a Wednesday interview with The Associated Press that he isn't ruling out vetoing the entire state budget if Republicans completely ignore his proposal and decide to write their two-year spending plan.

Evers reiterated that he wants to work together with Republicans who control the Legislature. But when asked if he would veto a GOP-written budget that disregards his plan, Evers said that "anything's possible."

"We have to find some common ground ," Evers said. "People in Wisconsin during the campaign made it clear that they were sick of partisanship. They want people to actually accomplish things instead of fight. And I'm not sure that that is consistent with the Republican's plan to have their own budget."

Evers is also considering raising the gas tax and other fees to pay for transportation needs, something that hit a road block in the Senate last session, although Assembly Republicans were open to the idea then.

Evers told the Wisconsin State Journal that his budget would include a "clear pathway" to increasing the state's $7.25 minimum wage, but wouldn't say by how much. Evers told the Milwaukee Journal Sentinel that he will propose in his budget to allow immigrants living in the U.S. illegally to qualify for driver's cards; give immigrants who came to the state illegally as children the chance to pay in-state tuition; allow property taxes to rise by more than they have in the past; and maybe let local governments increase sales taxes.

All of those proposals are likely to find Republican opposition.

The Legislature generally spends months dissecting a governor's budget plan, but Republicans could start from scratch and ignore Evers' proposal. The new budget year begins in July, but state government won't shut down if that deadline is missed.

Evers can partially veto spending items in the budget. That means he could sign into law some parts of the budget and reject others.

Evers said Wednesday that he also wouldn't be shy about vetoing non-budget bills.

The near certainty of vetoes will be a stark contrast from Walker's eight years in office, where he worked closely with the Republican Legislature. Walker vetoed only one bill outright during his first term. But Walker's predecessor, Democratic Gov. Jim Doyle vetoed 101 bills in his first term between 2003 and 2007, when Republicans controlled the Legislature.

Any Evers veto is likely to stick. The Wisconsin Legislature has not overridden a governor's veto since 1985. And while Republicans will maintain their majorities in the Senate and Assembly, they will not have enough votes to override an Evers veto without Democratic support.

Evers also told the AP that he will also proceed with plans to cut the adult prison population in half, but specifics were still being worked out.

"I don't think it's going to be solved in this first budget," he said, adding that he remains opposed to paying for opening a new prison to ease overcrowding.

In another break with Walker, Evers said he would be open to pardoning people if they have been rehabilitated and demonstrate they deserve it. Walker never pardoned anyone during his eight years as governor.

Evers told the Journal Sentinel that he would not go along with parts of the laws enacted during a lame-duck legislative session last month that limited his powers, but wouldn't specify which ones. The new laws limit his power over enacting state rules, prohibit him from appointing a leader of the Wisconsin Economic Development Corp. until September and require legislative approval before seeking federal waivers affecting benefit programs.

Evers said he expected to be named as a defendant in lawsuits, rather than bring litigation himself. One lawsuit challenging limits on early voting approved during the lame-duck session has already been filed, but no one has challenged other provisions.

Evers told WISC-TV that he's open to criminalizing first-offense drunken driving, something he also said during the campaign. Wisconsin is the only state where a first offense is a traffic infraction and not a crime.

"We have to find ways to make that first offense more meaningful to the offenders so they don't offend again or don't offend the first time," Evers said. "Whether that's making it a felony or not, I'm not sure."