George Mallet welcomes a new furry friend to the family

When I visited the Wisconsin Humane Society last week, I’d like to pretend I gave it a lot of careful deliberation.

I’d like to say I made hard and fast rules about the kind of dog that would work for my 4-year-old son and me. I’d like to pretend I was uncompromising about breed, temperament and age. I wasn’t. I had only two rules:

That second rule evaporated when a 50 pound sack of muscle, joy and enthusiasm came bounding out of his enclosure and announced he wanted to come home with me. His name is Spot and he is pure puppy. A mix of Dalmatian and who knows what, his combination of big feet and extra skin indicates he may be much larger soon. The good folks at the Humane Society had two other dogs that fit my personality (they know me pretty well), and the other two were fine mutts as well. There was, however, something unfailingly fervid about Spot and his entrance that made the decision easy.

Less than two weeks after the passing of my best friend, Charlie, I had found his successor. Turns out it was a good thing that my decision was so clear.

“Things have changed a lot since you adopted Charlie eight years ago,” said Angela Speed the vice president of communications for the Humane Society. “The people find the dog they want on our website and line up outside hours before we open. These dogs will all be adopted today.” 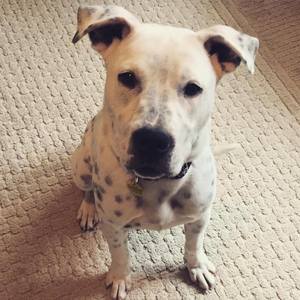 The Wisconsin Humane Society’s ability to vet animals, assess their personalities and pair them with suitable adopters is nothing short of amazing. Both people and animals are evaluated and the matches are largely successful. I knew if the Humane Society thought Spot and I were a good match, we probably were. What's more, I knew if I didn’t grab Spot, someone else with similar desires and personality traits would take him home within hours.

So as I was taking a shower later that afternoon, there was a gigantic puppy bouncing off of furniture, bounding from room to room and exploring my flat on the north shore. Fortunately, the Humane Society had urged me to also purchase a crate for my new roomie. His unbridled energy made it clear that I would have to bring my new charge along carefully.

Saturday afternoon was the big day. My son had returned from an extended visit to his grandparents in Minnesota and it was time to make introductions. After hockey practice, the meeting took place. Colton entered the bedroom to find his new puppy positively ecstatic to see his big brotherm and bouncing up and down within his large, metal crate.

“He’s crazy,” Colton exclaimed when he saw the excitement of his puppy. 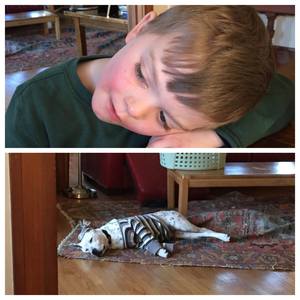 When I opened the cage, Spot ran right up to Colton and introduced himself with a combination of a head butt and wet kiss. “He’s crazy about me!” came Colton’s high-pitched proclamation. It was clear they were both crazy about each other.

What followed was an afternoon at the Estabrook Dog Park, during which our new puppy proved to be a friendly (if somewhat overwhelmed) member of the dog park pack. He alternated between being an alpha and a beta and remained in constant motion. My fearless, dog-loving son ran side-by-side with his new buddy and provided introductions to the dogs and people he remembered from previous excursions with our departed Charlie.

“This is Spot,” he told one elderly gentleman who had a large German Shepherd on a leash. “We got Spot because Charlie went to heaven! They had a parade when Charlie got there.” The man smiled even as he tried to pull his much larger dog away from the Dalmatian mix jumping over and running beneath his Shepherd.

Although it is clear I got a good, smart and gentle dog for my son, he is also large, fast and athletic. He is big enough to scare people, so I made the decision quickly to work with a trainer. My friend Steven Dickerson, who trains a wide variety of dogs (I call him my urban dog whisperer), consented to begin the training of my son’s “crazy” new buddy. That work begins in less than a week.

In the meantime, my son’s old dad will feed off the energy of a little boy and his new puppy. I will continue to mourn the loss of my longtime friend, Charlie. I’ve already learned, though, that the joy of a boy and a pup can go a long way toward easing scalding grief into something far more manageable.