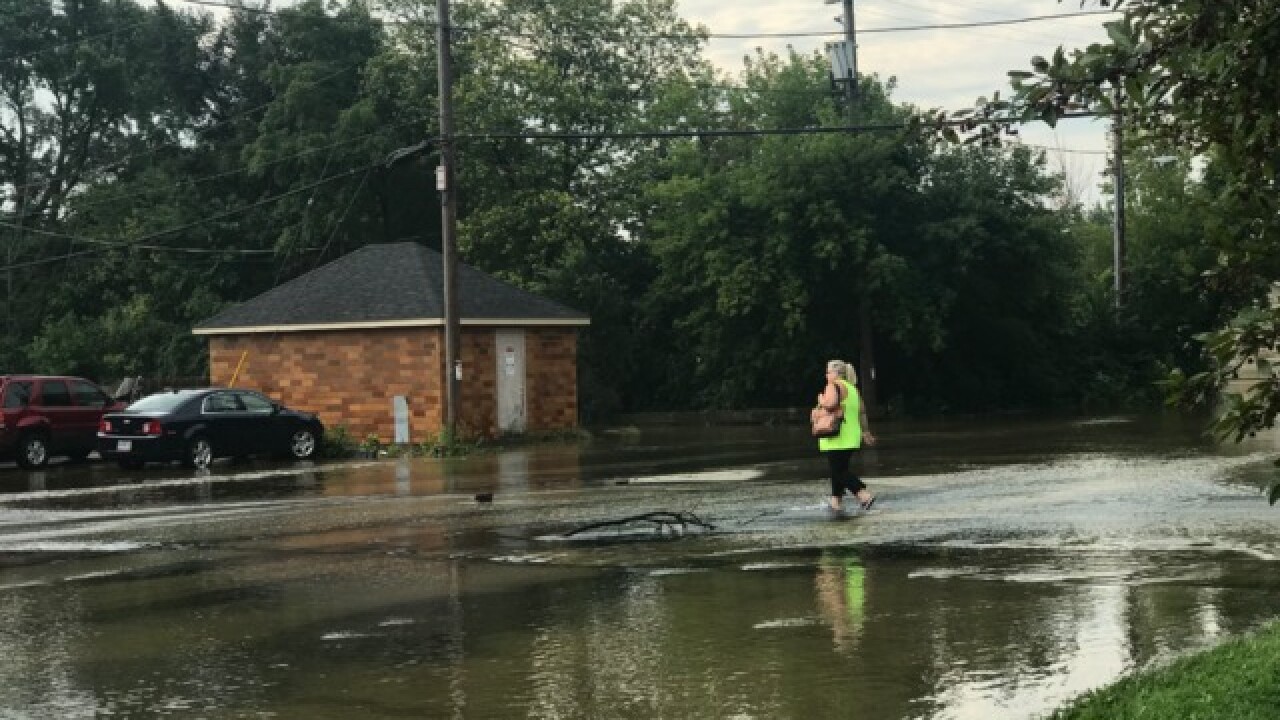 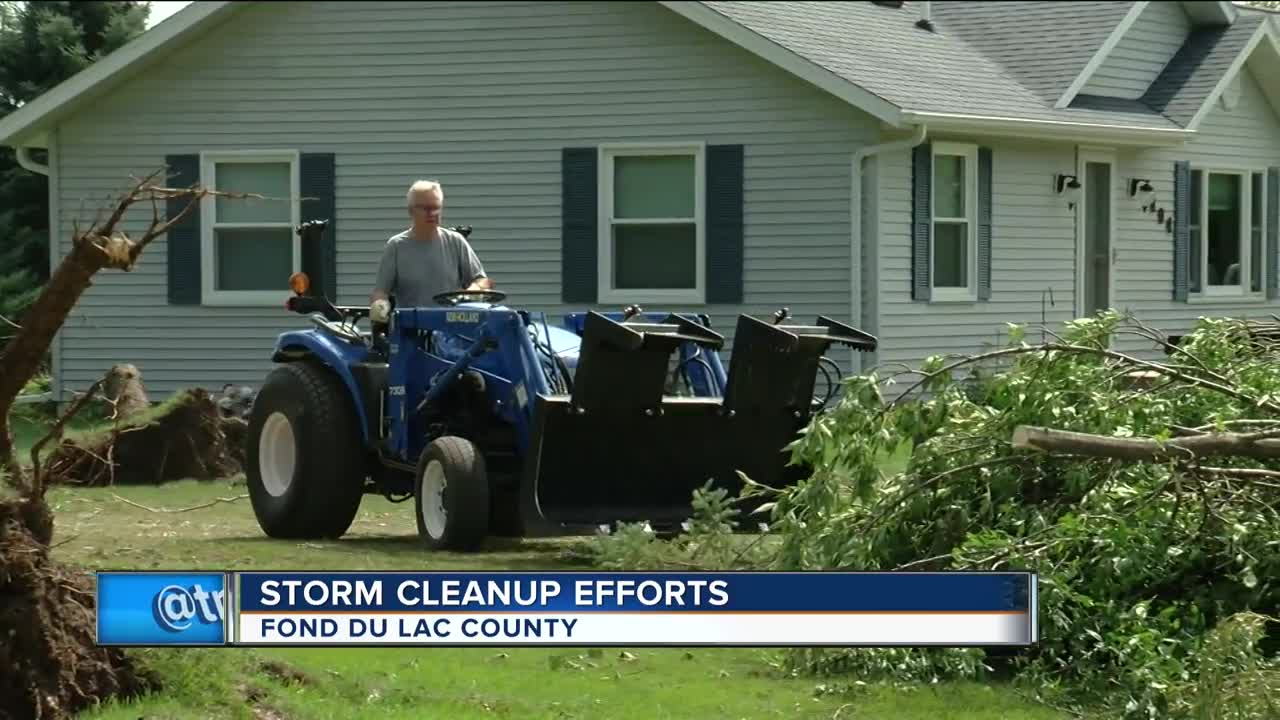 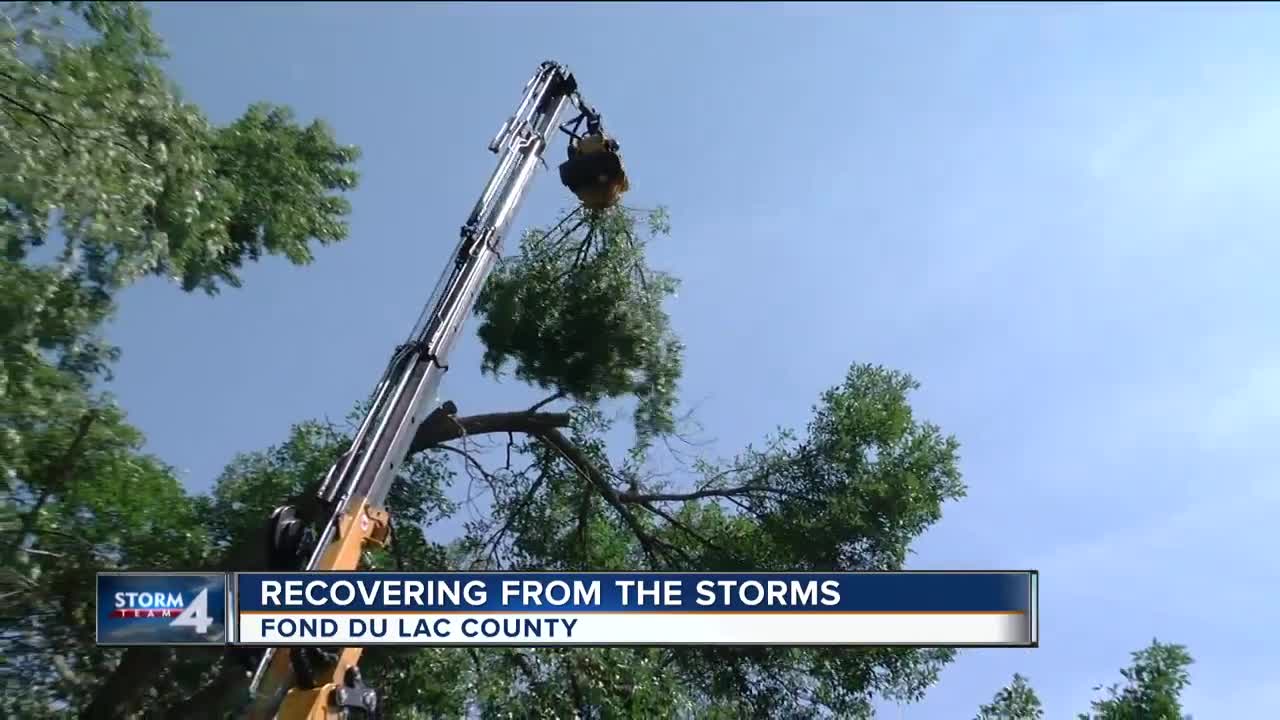 The air isn't filled with sounds of generators in Fond du Lac County anymore, but rather, chainsaws and motors from vehicles trying to remove massive uprooted trees.

Thulin and her husband have lived in their home in Brownsville for roughly 30 years. They've seen the trees in their yard grow up from small saplings to full grown privacy providers. However, after Tuesday's storms, ten of those trees are now gone.

"It's pretty devastating," Thulin said. "There's five trees in a row, they've been there for 30 years."

"It goes through your mind when storms go through but until one actually hits like this, I don't think it's sunk in yet," Lindsley Thulin said. "Trying to figure out what to do next is a good question. Every one of them stumps is going to be a hole in the ground to be filled up and patched."

Thulin just started heavy clean up efforts today after being on the road for business. He has the benefit of some heavy mechanical equipment to help with cutting up debris.

"If it was all manual labor, it would be very labor intensive," Thulin said. "If you got the right equipment, it isn't too bad."

With the number of trees that fell in their yard, they're lucky one didn't go through their home.

"We're lucky it didn't hit the house," Nadine said. "Thank god everyone is ok. Nobody got hurt and no structures got hurt either."

Not everyone in the area is so lucky. Lance Wallace with Wallace Tree & Landscaping Inc. says he's pulled trees off of four homes and had two more scheduled for Friday.

"We've been pulling trees off houses like crazy the last two days," Wallace said. "It's insane."

People like Timm Mayhew watched as 30-year-old trees laid on his home.
"You want to get it done and back to normal," Mayhew said. "Ain't going to happen for a while."

Mayhew had the help of crews to remove the tree from his home, but still had to remove other debris from his yard. After several days, things are starting to come together.

"Friends with chainsaws, neighbors, we work together," Mayhew said. "We don't ask. We just walk over and see where we can help."

Wallace has an advantage in removing trees from homes. However, it looks more like he's playing a video game than working.

"I can run five or six buttons at once now," Wallace said.

He has a new machine that can only be described as a chainsaw transformer. It can grab onto branches with a strong metal claw and with the flick of a button, a saw comes out to remove the limb with little to no movement. It not only looks cool, but it's safer and more efficient.

"We're faster and more efficient," Wallace said. "It's a game changer in the industry. This tree is cracked and it's hanging over the house. I have to be careful I don't drop it on the house. That's all I care about right now. That's my focus right now. Even though it doesn't look like it, it's draining."

The machine helps prevent injuries to the people on site and also, causing any more damage to the home. While business is booming after this incident, it also has a personal effect on Wallace.

"If I had a picture of every customer's face when I do a tree like this, it would be the same face," Wallace said. "They're thankful. You saved my house. I can go back in the house tonight. It feels good."

For this area in particular, he feels connected. He has been going through Brownsville for the better part of his life to go hunting with his family. So the recent storms have him feeling sentimental about the damage done here.

"I know a lot of these trees," Wallace said. "There are a bunch of oaks up there, a bunch of poplars by the cheese place. Oh my god, they're gone now. It's closer to home than I would think."

In Waupun, they're already gearing up for the next batch of storms. While everyone continues to clean up around the area, they're giving out sandbags at the City Garage on N. Madison Street with flash flood potential on the horizon.