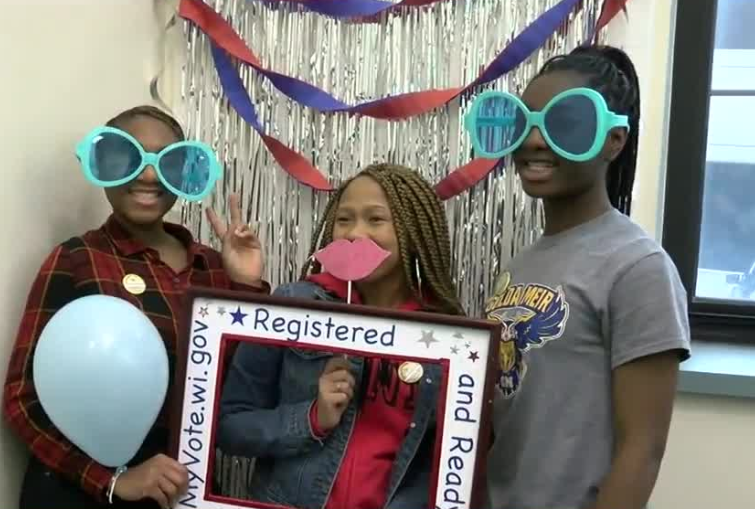 Seniors at Golda Meir High School in Milwaukee were allowed to leave class and register to vote today.

MILWAUKEE — The entire senior class, about 100 students in total, had a chance to leave class and register to vote at Milwaukee's Golda Meir High School on Jan. 28. The goal was to inspire more young people to vote ahead of the Feb. 18 Primary Election.

Senior Anthony Morgan registered to vote for the first time since turning 18-years-old.

"I kind of thought it would be confusing actually but its pretty easy," said Morgan.

He said he takes the opportunity to register to vote very seriously.

"Black males don’t vote enough and I want to start a movement the movement to vote more," said Morgan. "We are a large part of the community and we are so underrepresented."

Student Council President Mordechai Tinney helped plan the event. Last year, he said only about 20 kids participated in the voter registration event at Golda Meir High School. This year, he was expecting about five times as many students to participate.

Now, leaders with the city's election commission say they're inspired to hear about high school students registering to vote and they hope that means they will show up to the polls as well.

"It's a pretty critical demographic. Were talking about the future of elections and voter participation," said Neil Albracht, Executive Director of the City of Milwaukee's Election Commission.

Volunteers with the League of Women Voters of Milwaukee County agree that registration is an important first step. They also say events like this one are an opportunity for word to spread about how simple registering to vote can be.

"They can go home and register their neighbors, their cousins, their family," said volunteer Michele Samara.

For Morgan, the event is an opportunity of accessibility.

"I feel like if this wasn’t happening I probably wouldn’t have found time to go out and register," he said.

A chance to register to vote and celebrate with friends during a busy election year.