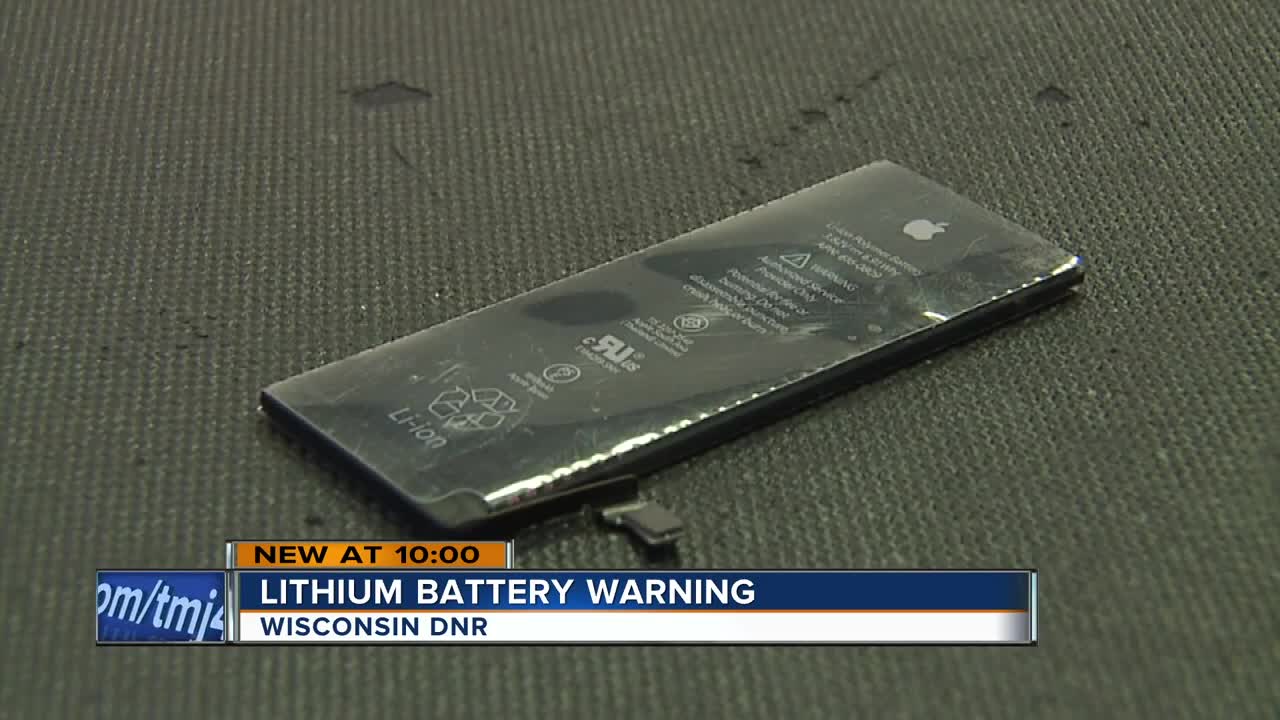 The department of natural resources is issuing a warning about lithium ion batteries after one was accidentally punctured and started a fire.

MILWAUKEE — The Wisconsin Department of Natural Resources is warning people about the dangers of tossing old electronics and their batteries out with your curbside trash or recycling.

On Friday, the agency posted on its Facebook page that a lithium-ion battery caused a fire in a compactor box at a waste facility in Outagamie County. No one was hurt.

"Batteries and electronic devices should never be placed in your curbside recycling container," the post reads. "Some batteries, like lithium-ion batteries, contain considerable charge even when they are 'dead.' These batteries are capable of sparking when damaged or crushed, which can often occur in waste and recycling operations. When a spark is mixed with flammable items like paper…it's easy to see why this is such a hazard."

"We are seeing more and more in the waste industry incidents of fires, many of them minor, but fires caused by these batteries that get damaged by equipment," said Sarah Murray, the E-Cycle Wisconsin coordinator for the DNR.

Tech repair workers at uBreakiFix on Silver Spring Drive say puncturing the lithium-ion battery can cause a reaction.

"If it was actually stabbed by something, so say like a knife, tweezers, something like that that would actually poke it and expose the inside of the battery, then it would go into thermal runaway and actually kind of start to combust," said LJ McMullen. "Especially in a landfill where there are a bunch of sharp, jagged objects all over the place."

That's why he says uBreakiFix crews take extra precautions when recycling non-functional batteries, which are taken to a special facility. And the battery does have a reaction, they put it in a bucket of sand.

The precautions surrounding batteries in electronics extend to airport security, as the TSA and the FAA prohibit extra lithium batteries in checked bags. Lithium batteries must be removed from luggage if they are checked at the gate and kept with you on the flights.

The DNR says electronics are banned at Wisconsin landfills.

"Batteries and electronics can't go in the recycling even if you want to recycle them, that's the number one thing," Murray said.

Instead, the DNR has information on its website about where you can safely dispose of your electronics.