David Clarke to reporter: "F--- you and the horse you rode in on"

David Clarke may not be the Milwaukee County sheriff anymore, but he hasn't lost the bombastic touch that made him so controversial.

Milwaukee Journal-Sentinel reporter Daniel Bice shared a screenshot of an email exchange he had with Clarke last week.

Bice emailed a set of questions related to the revocation of the former sheriff's security detail and Clarke shot back "F--- you and the horse you rode in on. I'm David Clarke and I approve this message" 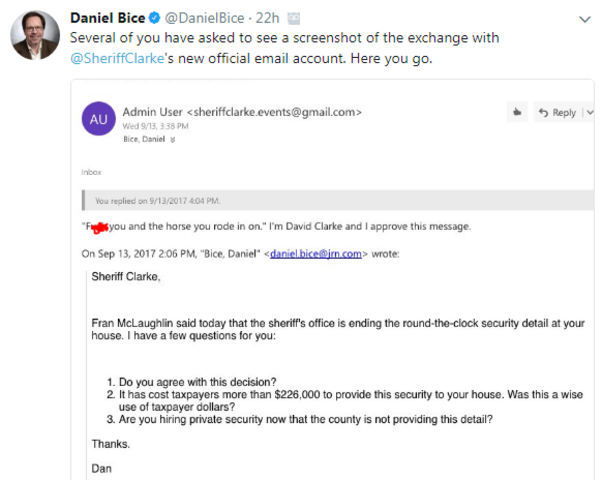 Bice took the opportunity to also tweet about another encounter he had with Clarke last year.

Through his spokeswoman, Clarke offered to get Bice a t-shirt for Christmas, sized "extra-small" with no tax dollars to be used.

Best email from @SheriffClarke and his team since he offered to buy me a Christmas present last year. Read below. pic.twitter.com/a8wb9R5jla

He rose to prominence as a national media figure during his tenure as sheriff of Milwaukee County, increasingly appearing on cable news outlets like FOX News to talk about police issues.

His tenure was not without controversy. In a span of six months in 2016, three people in custody died at the Milwaukee County Jail — as well as a newborn baby.

Clarke has decided to join a pro-Trump super PAC as an advisor and spokesman.