Trump leads all presidential candidates in Facebook interactions, plus, most Wisconsinites are talking about the issue of education.

The presidential candidates are making a last-minute campaign push in battleground Wisconsin, but there’s another battle for digital hearts and minds on Facebook.

TODAY’s TMJ4 obtained exclusive data from Facebook that shows what issues Wisconsinites are talking about the most, and which candidates are dominating the digital conversation.

The data shows that over the past 30 days, close to 1.6 million people in the state have made an interaction on Facebook — a reaction, share or comment — related to a presidential candidate. 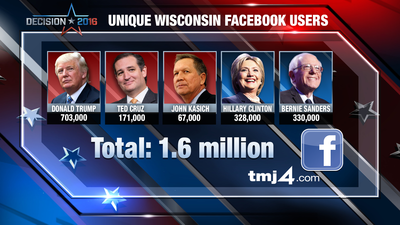 But when you break the data down further, Donald Trump leads the pack amongst all candidates with 703,000 of those people interacting more than 5.2 million times on Facebook.

Bernie Sanders is second in the state with 330,000 people interacting 2.1 million times. Hillary Clinton isn’t far behind Sanders with 328,000 and 2 million respectively.

Ted Cruz and John Kasich were fourth and fifth on the list.

The data doesn’t differentiate whether Facebook users are reacting negatively or positively to a candidate, so while most people may be talking about Trump, it may not necessarily be a positive indicator for the candidate. 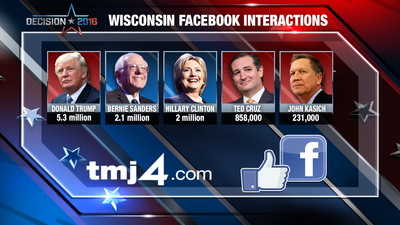 The same numbers taken before the Illinois and Ohio primaries showed Clinton beating Sanders in total interactions for both states, and the Republican lineup remaining the same.

Facebook also provided data that shows the top topics Wisconsin voters are discussing on the social media platform with education and poverty leading the way. 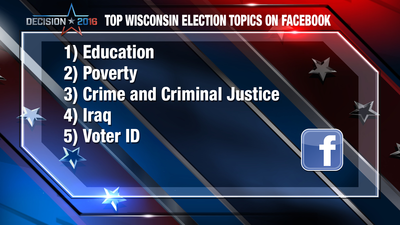