MILWAUKEE--Local movie lovers will be getting a treat come April with the start of a new "Almost Midnight" film series at Landmark's Downer Theatre on the city's East Side.

"We just decided to start having a midnight series, we're super excited about it," said Head Manager Rashad Kraima.

Well, almost midnight. Starting with the Big Lebowski on April 20, the series will run every weekend (both Friday and Saturday) until June 9, and the movies will start at 11:59 p.m.

The movies include classics such as The Shining, Psycho, and Raiders of the Lost Ark, along with some cult favorites: Bottle Rocket, Deep Red, Back to the Future, and The Room.

"If we get some butts in the seats we'll definitely consider going beyond just the single series and make it an all year thing," said Kraima. 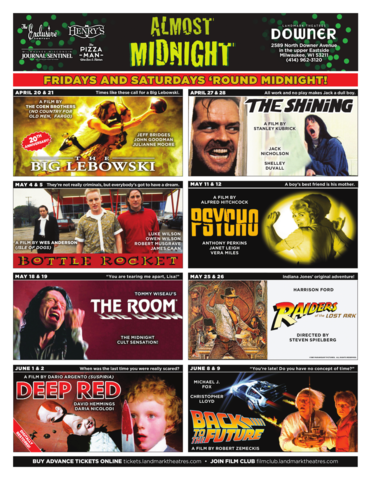 The idea for the series came about relatively quickly.

"We actually created this pretty quickly out of thin air, one of our assistant managers, Brody, was really excited about the idea. And I was like 'we could try it out I'm not sure if we've ever done a midnight series before,'" said Kraima. "We started talking about in mid- February, and then just kind of hustled to try to get everything together so that we could start advertising it and getting the word out there."

The theatre will be giving away prizes and hosting trivia during the series, and nearby businesses are getting into the fun with them.

Henry's, The Pizza Man, the Milwaukee Journal Sentinel, and The Exclusive Company are all sponsoring the series, and Henry's will be doing drink specials before the movies (if you have your ticket stub).

Tickets will be $8.50 for all attendees (including students and seniors).