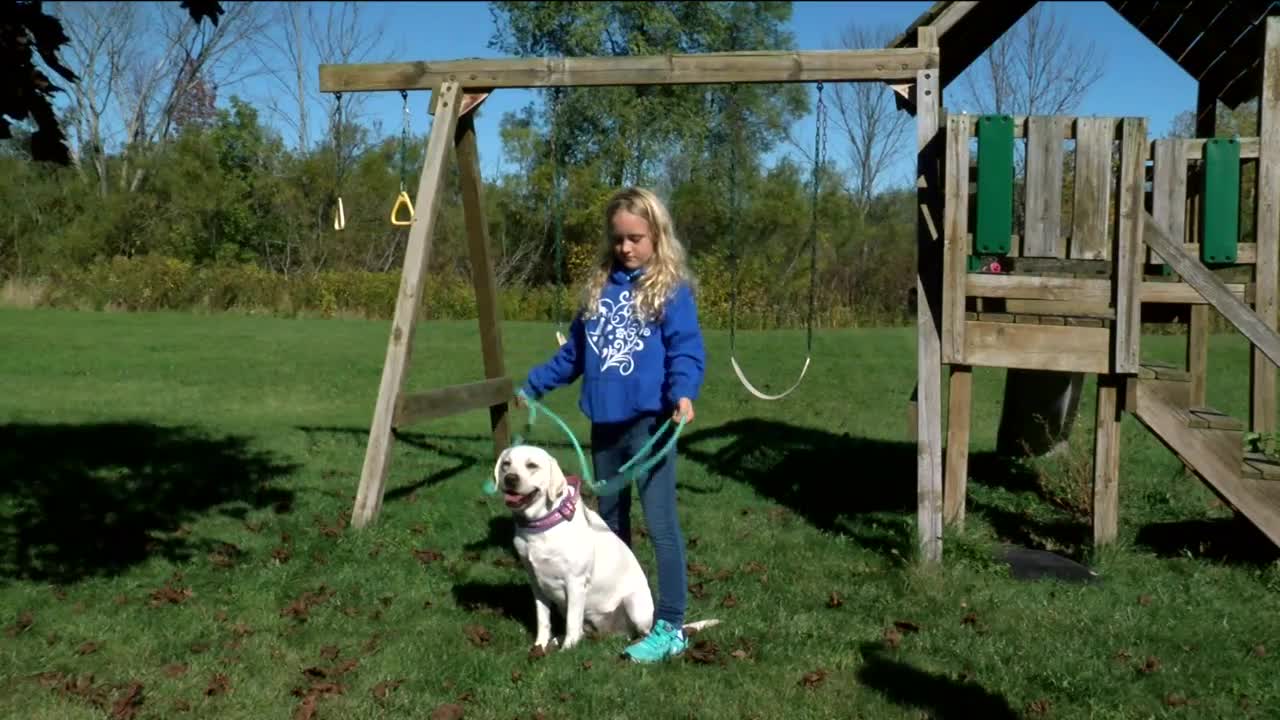 At the start of the pandemic, a complaint came into TMJ4 News' Call 4 Action Office from a Sheboygan family.

SHEBOYGAN — If you would like to contribute to the GoFundMe campaign for Sophie's diabetic alert dog, click here.

At the start of the pandemic, a complaint came into TMJ4 News' Call 4 Action Office from a Sheboygan family. They wanted the station to investigate a nonprofit in Virginia after they received an untrained service dog.

Soon after, the I-Team interviewed the mother and daughter, Sophie and Becky Schmitt.

Nine-year-old, Sophie is a Type 1 Diabetic. She wanted to get a service dog that could alert her when her blood sugars were too high or too low.

Her mom said Sophie spent nine months baking and selling dog treats and raised $20,000 from the community to get this dog, Jacoby.

But when they got the cream-colored Labrador retriever, they realized this was not the diabetic alert dog they were expecting.

"She didn't even know how to sit," Becky said.

Becky said Jacoby wasn't a puppy. She was three-years-old and didn't know basic puppy skills and she wasn't potty trained.

"She peed on the floor and chewed up a lot of stuff," Sophie said.

"People might say you didn't do enough research," the I-Team's Kristin Byrne said to Becky.

"I still get that scrutiny from people but I had talked to probably at least eight families that had good working dogs," Becky said.

All of those dogs including Jacoby came from Service Dogs by Warren Retrievers or SDWR in Madison, Virginia.

Because of COVID-19, Becky said there were strict regulations put in place for picking up Jacoby. She said the process felt rushed and happened at a trailer in a winery parking lot in Madison, not at the 235-acre farm where the dogs are raised.

"It was our understanding that Jacoby has you know that solid months of specialty training public access training as well as scent training for a Type 1 Diabetic alert training," Becky said.

In the contract she signed with SDWR, part of it reads, "Our dogs have countless hours of training by our staff & volunteers before they ever get delivered to their forever homes."

Part of the contract also says, "after delivery, the family & service dog will receive ongoing training & support over a period of 12-18 months."

SDWR Contract by TMJ4 on Scribd

"When did you realize this is not the dog you thought you were getting?" Kristin Byrne asked Becky.

"On the way home," she answered.

Becky says her calls and emails weren't returned. Ours weren't either. The number we called was out of service and SDWR's website was taken down.

"You actually found out there were other people involved. How?" Byrne asked Becky.

"We were sent a letter in the mail that we were listed as one of his creditors," Becky said.

This summer, the I-Team discovered Service Dogs by Warren Retrievers filed for bankruptcy. Signing on behalf of the debtor is the company's president, Charles D. Warren Junior.

On page 56 of the document, there are pages of creditors. Becky and other families are included in the list.

The I-Team did a zoom interview with former SDWR volunteers, former employees, and families who either received an untrained dog from SDWR or raised thousands of dollars and never got a service dog from the company.

"He's found a way to cover up all the bad stories and promote all the good stories," said Marcie Moore, a former volunteer, who helped raise puppies for SDWR.

"I want to see the organization held accountable," said Emily Meszoras, a former employee, who started as a volunteer with the nonprofit in 2015.

Sharon Lim of California said she never received a dog for her son, who has autism.

"We're out over $27,000 and part of it is to get that money back to our amazing community our friends and family who've helped us raise it. But the worst part of it is that I don't have a dog for my son," said Lim.

Christopher and Amanda, from Florida, said they received an untrained dog for their daughter with autism. The couple didn't want to share their last name.

"Right away within the first day, we noticed that the dog didn't respond to its name. It didn't know any basic commands. It was very fearful of everything," the couple said.

The I-Team reached out to attorneys representing the nonprofit in the bankruptcy but never heard back.

We also called and emailed Warren's personal attorney who currently represents him in a lawsuit filed by the Virginia Attorney General against SDWR. In an email, we asked if Warren felt remorse for families who say they were scammed. Below is his response:

"Mr. Warren has done nothing wrong, scammed no one, and for some to so accuse him, and for you to ask the question, is disgraceful."

He then said questions should be directed to SDWR, and not Warren, who is a former employee.

"I think even a shelter dog would have been better than this dog," said Christopher.

For these families, the most heartbreaking part is not having help for their children they desperately needed.

"Even if I get to the bottom of things legally, even if I track the money, which I know is a long shot, my son is still two years out of this process, two years out from the help we were seeking for him," said Lim.

For Becky, it's explaining to her 9-year-old that sometimes hard work doesn't always pay off.

"I would like to see Sophie have justice as well as all the other kids that raised funds," Becky said.

Warren's case is still in the court system. Court documents show trustees are looking to investigate how his assets started at more than $2 million two years ago and now are close to nothing.

Sophie and Becky tell the I-Team they are keeping Jacoby as a family dog, but recently got another puppy who they hope to train as a Diabetic Alert Dog. The other families have either hired attorneys, tried to train the dogs they have, or paid for new service dogs.

Sophie is now raising money to train her new puppy, Shadow, to become a diabetic alert dog. You can contribute to Sophie's GoFundMe here.