'It sends a message': Stiff penalties can follow school threats 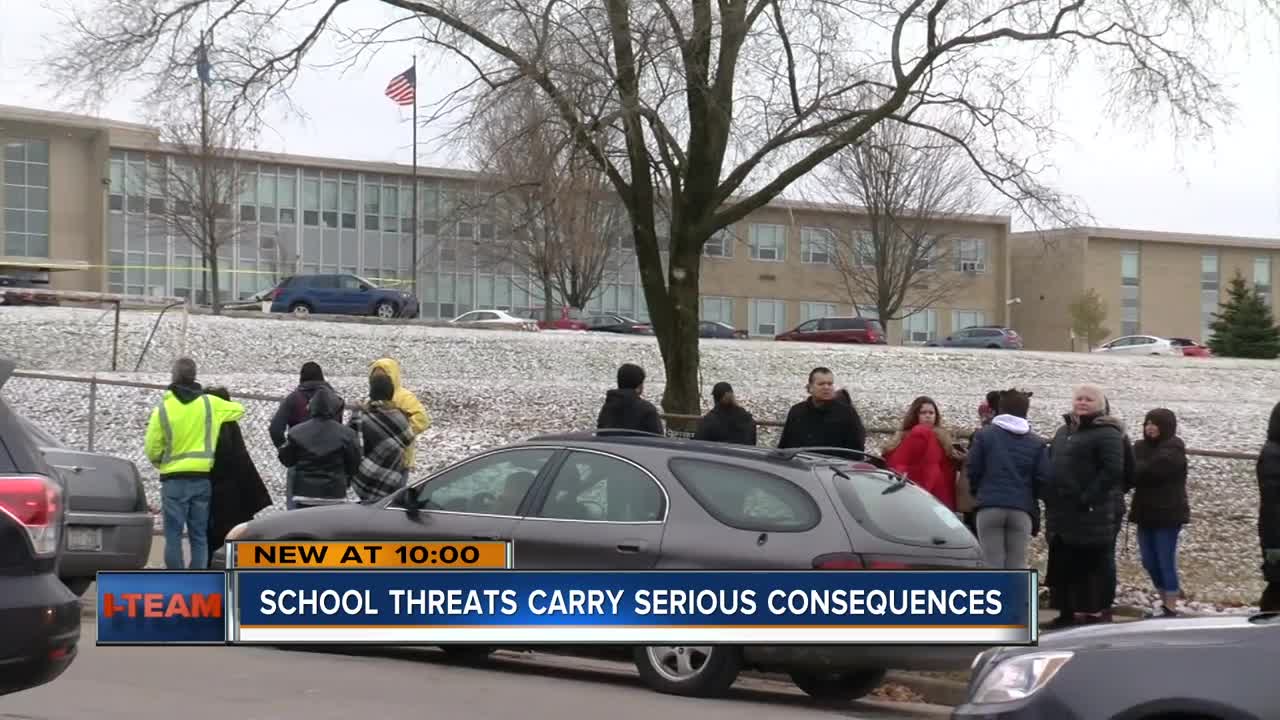 Over the last two weeks Southeast Wisconsin has experienced several threats of violence to schools, and law enforcement officials want people to know these threats have real consequences.

Over the last two weeks Southeast Wisconsin has experienced several threats of violence to schools, and law enforcement officials want people to know these threats have real consequences.

Waukesha, Oshkosh and West Bend have all locked down school in the last few weeks. But school threats can be a weekly occurrence.

Lt. Matthew Rohlinger with the West Bend Police told the I-TEAM they investigate every joke, suspicious social media message and off-color comment people report to them.

"There's appropriate places to vent your frustrations and talk about things, but there's also times and places where things are just inappropriate," Rohlinger said.

He said on a slow week West Bend Police investigate a couple of threats against schools.

Most of them are empty, but they are time consuming involving multiple interviews and combing social media for information.

"Everything gets looked into, and we're just glad when it turns out to be something that was made up," Rohlinger said. "However, all the time and resources that go into it just because you made something up or you fabricated something doesn't mean there aren't consequences to that."

After police investigate, it's up to the county's district attorney's office to decide what those consequences are.

If you make a threat, you could be charged with disorderly conduct, a Class B Misdemeanor that has a maximum penalty of 90 days in jail.

If your threat is serious enough to evacuate of close the school, you could be charged with making terrorist threats, a Class I Felony that has a max consequence of three and a half years behind bars.

"I think it sends a message to the community that police and prosecutors will take these matters seriously," said Waukesha County District Attorney Susan Opper.

Opper's office saw two school threats made in one day earlier this month.

"In reality, there's not a lot of these cases but it feels like that because of the threat and the danger that average citizens feel when they hear something like this," Opper said.

Because the suspect in the Waukesha South incident threatened another student with a gun, he faces a felony charge of second degree recklessly endangering safety.

Opper couldn't talk about the Waukesha South case, but hopes seeing anyone charged for a threat will deter others in the future

"I think the biggest goal is so the public feels safe and knows that the crime is treated as serious as what the law will allow for," Opper said.

Opper believes many of these cases involve mental and behavioral health issues. She told us where added resources may be needed she tries to use the system.

'It sends a message': Stiff penalties can follow school threats
Copyright 2019 Scripps Media, Inc. All rights reserved. This material may not be published, broadcast, rewritten, or redistributed.