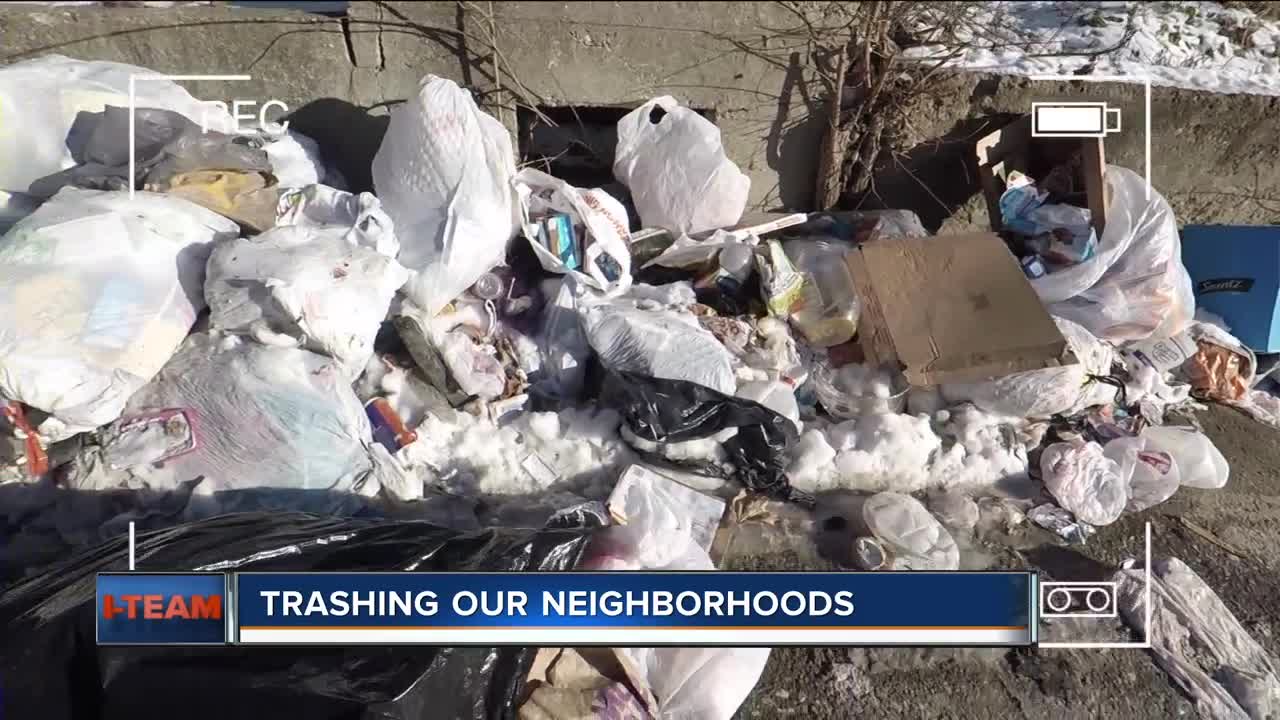 Dump sites are found in alleys, corners and sidewalks all across Milwaukee, but the I-TEAM found finding the people responsible is not as easy.

MILWAUKEE — Dump sites are found in alleys, corners and sidewalks all across Milwaukee, but the I-TEAM found finding the people responsible is not as easy.

Even when offenders are caught, we discovered they aren't always paying the price.

Neighbors told us it wasn't just an eyesore, but a health hazard.

"We got kids that play and can really get hurt on this stuff," said Noah Watson.

If the offenders aren't caught, the homeowners of the properties they dumped on are left with the cost of cleaning up.

"If you're talking someone drops a ton of concrete in your alley, the person that has to move that is you," said Milwaukee Municipal Judge Derek Mosely.

When they are caught, illegal dumpers can come before Mosely in the municipal court system. He says the city can order a homeowner to clean up the mess illegal dumping offenders leave behind.

"I see a lot of frustrated homeowners, and I don't blame them," Mosely said. "I would be frustrated. This is no fault of your own but as the city inspector comes by and sees it, you're the homeowner, you're held responsible for it."

In 2019, Milwaukee residents complained about illegal dumping 265 times. Enough evidence was gathered to hand out 22 citations.

"These are individuals that live outside of the city but are doing work in the city," Mosley said. "And instead of doing what they're supposed to do as a business and dispose of that legally at facilities, they decided that I'm just going to dump it here in this alley or I'm just going to dump it on a dead end street and drive away and I won't have to worry about it."

The I-TEAM also found, when they are caught, the delinquent dumpers don't always pay.

In that three year stretch, just four offenders paid their fines in full.

"It's devastating simply because as an alderman I know the fight that's being put up by neighbors and residents across the city of Milwaukee," said Alderman Khalif Rainey.

Rainey's district is one of the most affected in the city on the near north side.

He believes when people don't pay, they should be held responsible to the full extent of the law.

Mosely said some offenders have gone bankrupt and can't pay, but others could end up behind bars for failing to pay up.

"Ultimately holding them accountable would be what leads the to additional dumping from occurring in neighborhoods going forward," Rainey said. "So I'd like to learn more about this, this is something that was disturbing, startling to hear about."

Watson, who lives near Johnsons Park, is fed up with dumping in his neighborhood, but he is in the hauling business himself, and can see why people take the risk, to cut costs.

"They are asking a whole lot of money per dump," he said. "Now if people are just doing cleanups or stuff and they can't find a place to dump, I mean, that's when we come up with that problem."

Last year the city changed the way it charges to dump at the city drop off centers.

Loads under a cubic yard are free, but according to the city's website residents can pay between $20 and $90 depending on the size of their load.

Joe Wilson of Keep Greater Milwaukee Beautiful believes residents have a responsibility to pay the fees to keep the city clean.

He wants people to speak up when they see illegal dumping.

"You'd have to have people pretty much everywhere and that's why we count on the citizens a lot that if they see it they ought to report it," Wilson said.

We reported a number of dump sites to the city of Milwaukee as part of this report. If you see illegal dumping, you can report it as well by calling 414-286-CITY or report it online.