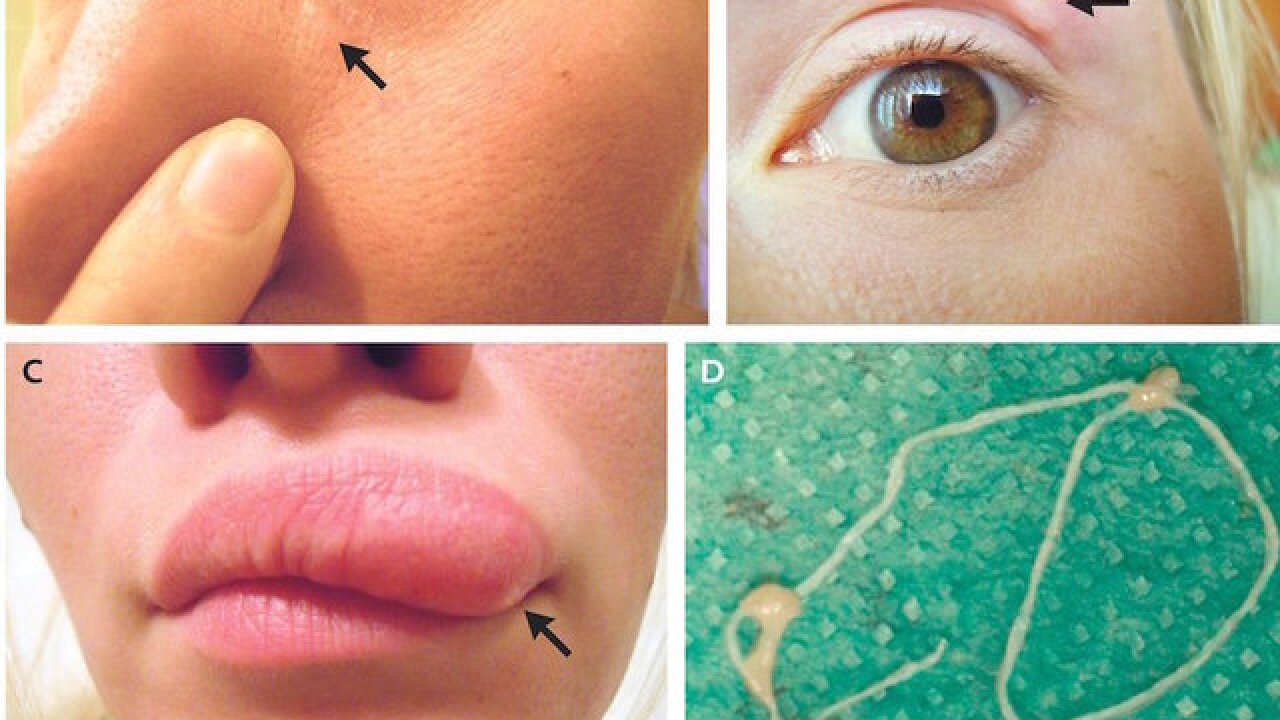 In selfies, a woman documented a lump under her skin for weeks before doctors were able to remove it -- and it didn't stay in one place, according to a case report in the New England Journal of Medicine.

The lump appeared after the unnamed woman, 32, visited a rural area outside Moscow. First, it was a small bump under her left eye. Five days later, it appeared above the eye. Her upper lip was bulging 10 days after that.

Doctors ultimately gripped the bulge with forceps and, using local anesthesia, pulled out a parasitic worm known as Dirofilaria repens.

"The parasite can appear and disappear in few minutes," Dr. Vladimir Kartashev, a professor of medicine at Rostov State Medical University who saw the patient, told CNN in an email. "Doctors who are not familiar with the disease don't believe ... the patients. That's why I asked the patient to make selfies."

But Kartashev had seen "at least 10 patients with the same presentation before," and the migrating form can be "extremely confusing," he said.

The parasitic worm is normally found in dogs and other carnivores, entering the body as a larva through a mosquito bite, according to the US Centers for Disease Control and Prevention. Humans may become "accidental hosts," the agency says.

"It is rare for it to cause disease in humans," Dr. Jorgen Kurtzhals, professor at University of Copenhagen and Copenhagen University Hospital and president of the World Federation of Parasitologists, told CNN in an email. Kurtzhals was not involved in the care of this patient but has previously co-authored a case in which one of these worms was removed through eye surgery.

In their adult form, they can be as long as 170 millimeters and live for five to 10 years, according to CDC. Cases have been reported around the globe, particularly in parts of Europe, Asia and Africa.

"Dirofilaria repens is an emerging parasite of the Old World," Kartashev said.

In humans, D. repens, as it's referred to, usually appears as lumps under the skin and have occasionally been found in the eye. But in rarer cases it has been found elsewhere: the lung, breast, male genitals. In a 2009 case report, one strain of the parasite even caused meningoencephalitis, or inflammation of the brain and its surrounding membranes.

Generally, though, the worm causes "no serious harm to humans (but certainly to the dogs)," Kurtzhals said. "A lot of people have a fear of contracting worms of various kinds. I think it is important not to scare people. This is still a very rare condition -- despite the apparently rising numbers."

Because the worms typically remain infertile in humans, the cure is usually to remove the parasite through a small incision.

"It took not more than 15 minutes," Kartashev said.