Kamala Harris to run for president in 2020

(CNN) -- Kamala Harris announced Monday that she is running for president in 2020, arguing that the time has come to fight against what she views as the injustices of the past two years of the Trump presidency.

In a brief video from her campaign that was released on social media Monday morning at the same time she appeared on ABC's "Good Morning America," Harris called on her supporters to join with her to "claim our future."

"Justice. Decency. Equality. Freedom. Democracy. These aren't just words. They're the values we as Americans cherish. And they're all on the line now," Harris said in the video, teasing her official kickoff in her birthplace of Oakland next Sunday.

"The future of our country depends on you and millions of others lifting our voices to fight for our American values," the Democratic California senator said. "That's why I'm running for president of the United States. "I'm running to lift those voices, to bring our voices together."

Harris is the first African-American woman to announce a run for the White House in 2020, and the third woman in the field. Democratic Sens. Elizabeth Warren of Massachusetts and Kirsten Gillibrand of New York have both announced exploratory committees, a step that Harris is skipping.

In a 2020 field that could include as many as four women, her allies believe that her life's work as a prosecutor -- from her start in Alameda County trying grisly crimes such as sexual assault to felonies including homicide -- will help set her apart. The style developed over those years helped her build a national following when she grilled President Donald Trump's nominees, including Brett Kavanaugh when he was a Supreme Court nominee.

Her book tour earlier this month served as a soft launch for her presidential bid, showcasing her strong appeal among women, minorities and millennials — as well as the criticism she will face over aspects of her long and complex record as a prosecutor, district attorney of San Francisco and attorney general of California.

She sought to use the anecdotes in the new book to demonstrate her toughness, including how she took on the big banks as California's attorney general after the foreclosure crisis and held out for a $20 billion settlement for California homeowners. The clear subtext throughout her appearances was that she would not be bullied by anyone, including Trump.

While avoiding directly engaging Trump, Harris has accused the President of stoking racist and xenophobic rhetoric, while aligning his administration with white supremacists at home, and cozying up to dictators abroad.

She has argued that the needs of the middle class have been ignored, citing the federal shutdown over the President's "vanity project" — a border wall — as the latest example.

'Kamala Harris for the people'

Harris' campaign will be headquartered in Baltimore — giving aides an East Coast hub in a racially diverse city that has struggled with wide income disparities — and Oakland, where Harris was born to immigrant parents who came to the US to advance their academic careers.

Harris chose to announce on Monday to honor the legacies of two of her heroes.

Forty-seven years ago this week, Shirley Chisholm, the first black woman ever to run for president, launched her campaign. And Martin Luther King Jr. has been a role model for Harris throughout her life in what she views as his "aspirational fight for progress."

The former prosecutor chose yellow and red for her campaign logo in a nod to Chisholm's bid for president with its red and yellow campaign buttons.

Her signs will carry her campaign theme "Kamala Harris for the people," the words that she spoke each time she rose in the courtroom as a prosecutor.

In her memoir, "The Truths We Hold," she writes about the "nerves, excitement, and adrenaline" running through her mind the first time she said those words as prosecutor.

"I was honored by and conscious of the immense responsibility I held—the duty to protect those who were the most vulnerable and voiceless members of our society," Harris writes in her book.

That has been a constant theme of her appearances over the past year on her book tour, and in early-voting states like Iowa and South Carolina, where she will campaign on Friday.

Her progressive record as a prosecutor

Harris' record as a prosecutor has come under scrutiny each time she has run for office, both from the right and left. Some of the criticism has come into sharper focus as she has weighed a run for president and criminal justice has moved to the forefront of the Democratic agenda. 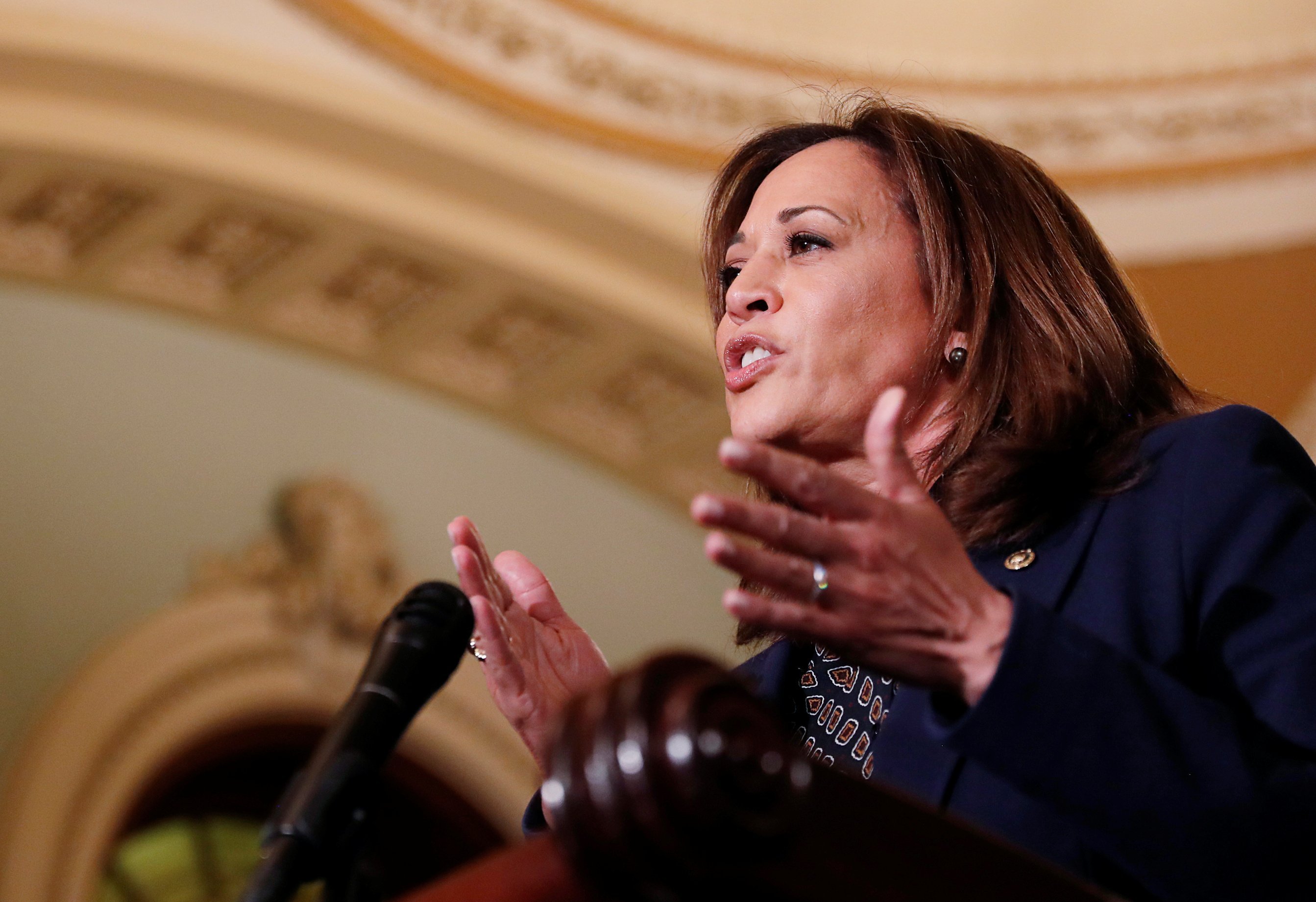 From the time that Harris told her family that she wanted to become prosecutor, she was on the defense about why she, as the child of civil rights activists, would be part of a system that disproportionately incarcerated black and brown men.
Harris sought to be part of changing the system from within from her early days as district attorney in 2004, when she created a diversionary program for first-time offenders charged with drug offenses that moved them into job training and apprenticeship programs.

She also launched programs aimed at reducing implicit bias as district attorney of the city and county of San Francisco and as California's attorney general beginning in 2011. But some felt she did not do enough to support progressive ballot propositions revising California's three-strikes law, for example, when she became attorney general. She maintained that she should not take a position, because she was responsible for writing the ballot language.

When she became attorney general, she came under fire for her decision to defend the death penalty — out of what she described as a sense of duty to the office — even though she personally opposed it. She won praise from the Los Angeles Times editorial board, but disappointed activists who had hailed her for withstanding intense pressure in 2004, when she did not seek the death penalty for the killer of San Francisco police officer Isaac Espinoza.

Juan Rodriguez, the strategist who managed Harris' successful campaign for Senate in 2016 and advised California Gov. Gavin Newsom in his recent campaign, will be her campaign manager. Her sister Maya Harris, who advised Hillary Clinton's presidential campaign, will serve as her campaign chair. She will continue to be guided by her longtime strategists Sean Clegg and Ace Smith.

Harris' team has been interviewing potential aides in Iowa and New Hampshire. Her team clearly sees her strongest potential for an early state victory in South Carolina, where African-Americans made up 61 percent of the Democratic primary electorate in 2016.

From the Palmetto State, Harris hopes to notch another win because of her neighboring state advantage in Nevada, where she has campaigned extensively for other candidates.

The challenging task for Harris after those early state hurdles would be to try to fend off her challengers and consolidate the African-American vote. If successful, the goal would be to rack up a series of wins in the Southeastern states of the old Confederacy, where the most powerful force within the Democratic primary electorate is African-Americans.

Harris' home state of California has also moved up its primary to Super Tuesday—but that will also be a tough battle given the expense of driving a message on television in the Golden State.

That is one of the many reasons she'll be kicking off her campaign in her home base of Northern California, the place where she first campaigned for office, greeting voters at grocery stores while using her ironing board to hold her posters and her flyers.

In her video sign-off, she sought to build the crowd for her Jan. 27 rally there: "I'll see you in Oakland," she said.