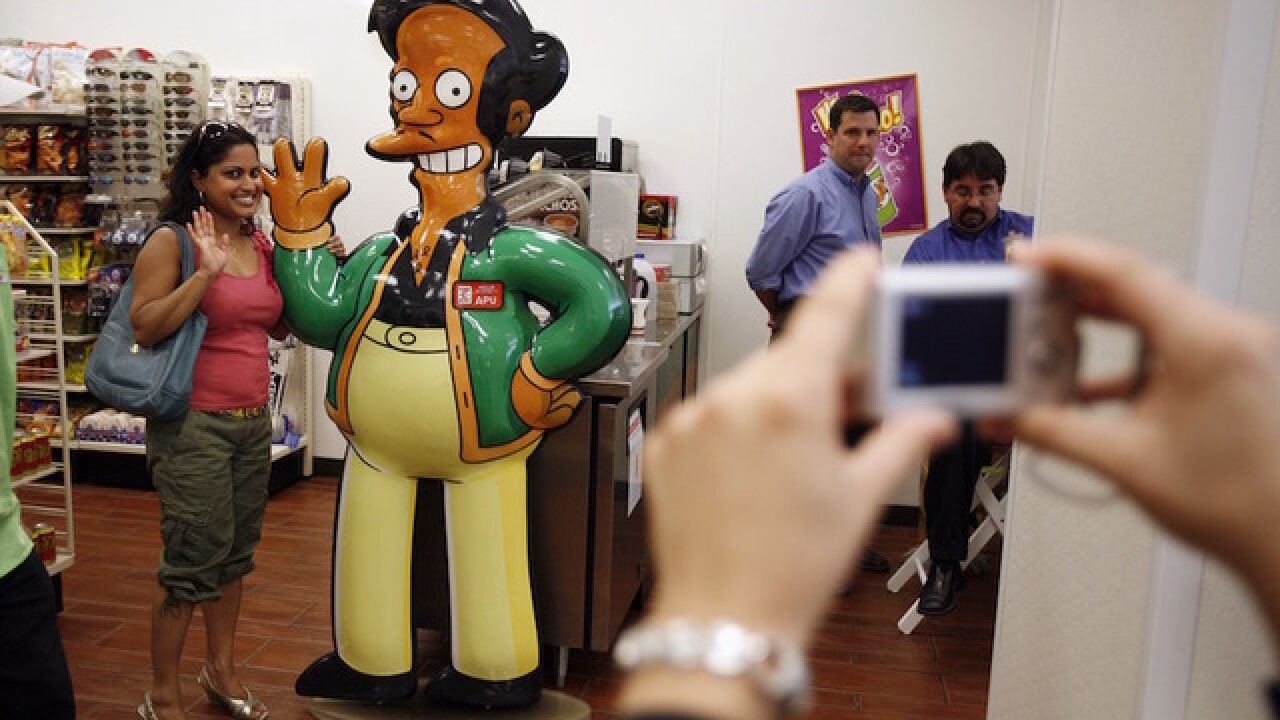 Copyright Getty Images
Michael Nagle
<p>NEW YORK - JULY 2: Shelly Ramsammy poses with a representation of "Apu," fictional owner of the Kwik-E-Mart from the long-running televsion cartoon show "The Simpsons" at the 7-11 store at 345 W 42nd Street, converted to a Kwik-E-Mart to promote "The Simpsons Movie" opening next month, July 2, 2007 in New York City. (Photo by Michael Nagle/Getty Images)</p>

Sunday night's episode of "The Simpsons" took on the controversy over a character, and not everyone thought the response was funny.

Nahasapeemapetilon is an Indian-American character who operates the Kwik-E-Mart convenience store in the fictional town of Springfield. The character is voiced by actor Hank Azaria, who is not South Asian.

In his doc, Kondabolu interviewed several big name celebrities of South Asian descent, including Aziz Ansari and Kal Penn, to discuss how characterizations like Apu can be viewed as a form of racism.

On Sunday night's episode of "The Simpsons," mother Marge Simpson is seen reading a book to her daughter Lisa in which she refers to the heroine as a "cisgender girl" and tries to modernize the action.

Lisa notes that the character as such is "already evolved" and "doesn't really have an emotional journey to complete," so as such there's "no point" to the book.

Marge asks, "Well what am I supposed to do?" and Lisa's response was clearly meant to be one to the Apu controversy.

"It's hard to say. Something that started decades ago and was applauded and inoffensive is now politically incorrect. What can you do?" Lisa says before looking at a framed photograph of Apu on her nightstand which is inscribed with the message "Don't have a cow."

The scene stirred some emotions on social media, with one person calling it a "completely toothless response."

Kondabolu tweeted that he found the response to be "sad."

"In 'The Problem with Apu,' I used Apu & The Simpsons as an entry point into a larger conversation about the representation of marginalized groups & why this is important," he also tweeted. "The Simpsons response tonight is not a jab at me, but at what many of us consider progress."

"I think the fact that they put this "argument" in the mouth of Lisa's character, the character who usually champions the underdogs and is supposed to be the most thoughtful and liberal, is what makes this the most ridiculous (as in worthy of ridicule) and toothless response," Bell tweeted.

But some found it much Apu about nothing, pointing out that "The Simpsons" make fun of everyone.

In 2015, Azaria talked about voicing Apu as part of the Emmy TV Legends series.

He said he understood some of the criticism given that 25 years ago when "The Simpsons" premiered Apu "was the only Indian character in pop culture really."

"Now ... if you are a young Indian-American person you have a lot of role models to choose from," Azaria said. "So Apu can just be one funny one."