The peculiar similarity sheep farmers and barbers have 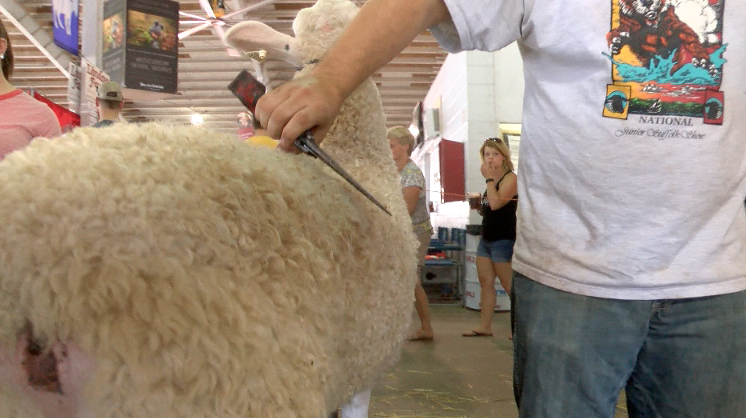 Both sheep farmers and barbers have to be nimble with a pair of scissors to be good at their jobs.

MILWAUKEE — “We really just mix it up and work it in.”

"Make him just look sharp and put together.”

“It's like if you have a job interview and you want to look perfect, you just go in for a little bit of a trim, make him just look sharp and put together.”

This sure sounds like what a barber would say, but surprisingly it's not. This is a sheep farmer explaining how she gets her sheep ready for competition.

"I mean, it is great to win and you're obviously competitive. That is why we spend so much time doing it, but it is, at the end of the day, you are out there with people that you like," said Tiffany Deakin, a fourth-generation sheep farmer.

She and her brother Colin have been doing this for as long as she can remember.

"Our family has been showing competitively for three generations," she said.

On Friday, one day before the sheep show at the Wisconsin State Fair, she and her brother (and her brother's girlfriend) were cleaning up their sheep.

"Give them a nice little scrub."

Aside from raising these sheep, the day before a competition they have to trim, brush and scrub them down to get them clean and presentable.

"If we got paid by sheep what barbers got paid per person, this would be lucrative.” — fourth-generation sheep farmer Tiffany Deakin

The sheep even get a deep shampoo scrub, but there isn't a tip given after this appointment.

"If we got paid by sheep what barbers got paid per person, this would be lucrative,” she said.

Judges are looking for a few key attributes.

"Sixty percent structure, 40 percent wool. They look at the gait when they walk. If his head is breed character. So we breed of those really long ears and Roman nose.”

It takes a lot of skill to win, and that's something the Deakins have. Their family is being inducted into the Wisconsin State Fair Sheep Barn Hall of Fame.

Tiffany is quick to say she likes talking about farm culture and her sheep. It's what gives the public a window into a vital workforce of our country. She also takes a lot of pride in her sheep. With each snip, she is preserving her family's legacy and carrying it into the future.