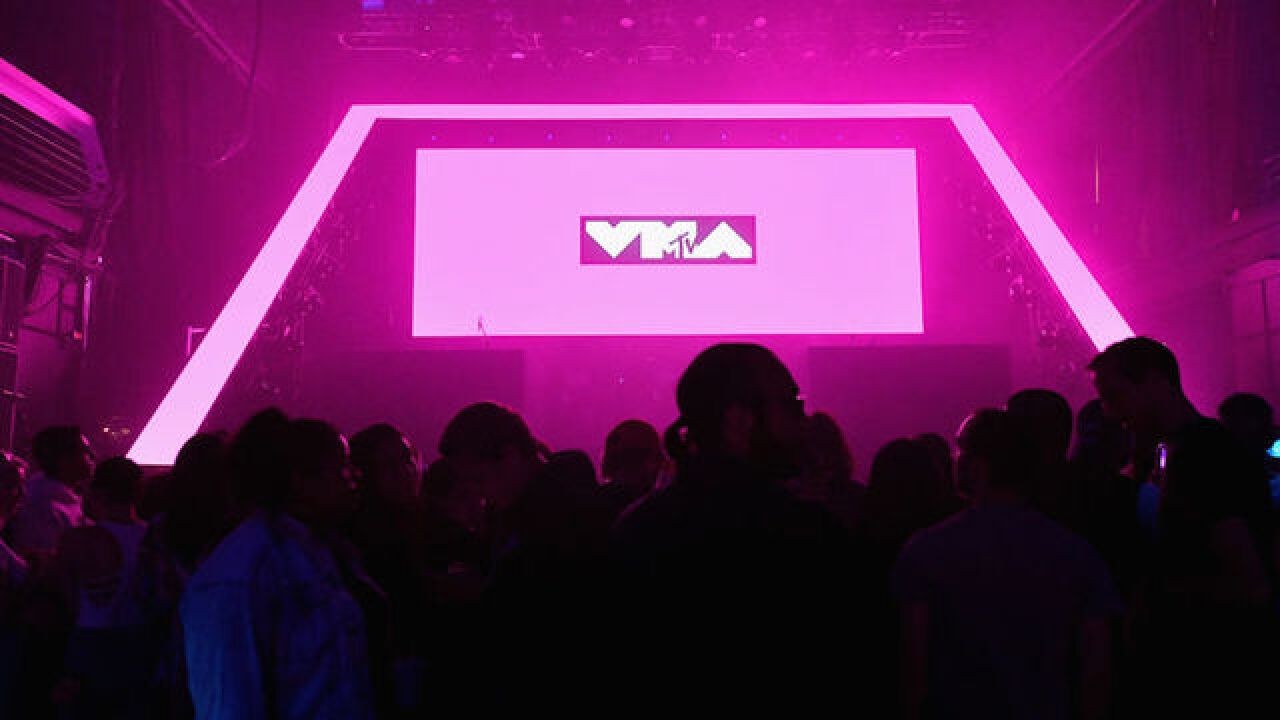 Image copyright 2018 Getty Images. All rights reserved. This material may not be published, broadcast, rewritten, or redistributed.
Dia Dipasupil
<p>A view of the crowd during the MTV VMA Kickoff Concert presented by DirecTV Now at Terminal 5 on August 19, 2018 in New York City. </p>

The MTV Video Music Awards are Monday in New York City at Radio City Music Hall, and Cardi B leads the nominations with 10 nods. Jennifer Lopez will be honored with the Michael Jackson Video Vanguard Award, and one video will walk away with the Moonman for Video With a Message.

The category is relatively new and has been won by videos including Lady Gaga's "Born This Way" in 2011, Macklemore and Ryan Lewis' "Same Love" featuring Mary Lambert in 2013, and Beyoncé's "Pretty Hurts" in 2014. Last year, days after the deadly white supremacist rally in Charlottesville, Virginia, Susan Bro, the mother of counter-protester Heather Heyer who was killed at the rally, presented the category, then called "Best Fight Against The System."

Director Andy Hines, a past winner who's up for the award again this year, called Video With a Message, "the only VMA that's worth, in my opinion, being nominated for." Here's a preview of the videos up the award in 2018:

"This Is America" - Childish Gambino

"This Is America" was an immediate sensation, racking up more than 80 million YouTube views in a week, rocketing to the top of the Billboard Hot 100, and inspiring articles, Twitter threads, and conversations about its meaning. The video was directed by Hiro Murai, who's worked with Donald Glover on other projects including the FX series "Atlanta." Murai told Vanity Fair that Glover pitched him on a video that showed him shooting a man and a church choir, and it grew from there. "Those were the two things he pitched me, and from that, and from the way he was kind of miming the dance moves, we abstractly started bouncing the ball back and forth," Murai said. Glover said Murai handled the "tricky" concept well. "Hiro's really good about restraint," he said.

On "Liberated," DeJ Loaf and Leon Bridges sing about living free and not worrying what other people think, and for the music video, directed by Calmatic, they asked other people what being liberated means to them. "Freedom," "owning my voice," and "being you" were some of the answers, and the video focuses on people of color and members of the LGBT community ("I won't judge who you love, or your brown skin," DeJ sings near the top of the track). For DeJ, liberation "is about freeing yourself from negativity, doubt or anything that shackles you. Its about feeling confidant, proud and alive," she said in a statement from Columbia.

"God's Plan" was a massive hit (11 weeks at No. 1 on the Hot 100) on a massive album full of them (Drake's Scorpion set a new streaming record and includes three No. 1 hits), and its music video had a massive $996,639.90 budget that was all given away, according to the video's opening credits ("Don't tell the label," it said). Drake presented checks to a Miami high school, gave a biology student at the University of Miami a $50K scholarship, and paid for all groceries for a store full of shoppers. When Fader asked five religious leaders what they thought of the video, Mona Haydar, from the Islamic Center at NYU, said it had her "in tears" and "made me wish that we would talk seriously about things like reparations in America for indigenous and Black peoples." "I love that Drake is using his influence to serve love, beauty and dignity- with honor and grace," she said. Drake called the video, "the most important thing I have ever done in my career."

The 48-minute short film released with Janelle Monáe's Dirty Computer album was set in a dystopian world where people who look different or don't fall in line are deemed "dirty," and the video for "PYNK" serves as a flashback for before the bad guys took over. "I was listening to the lyrics a lot and came up with some ideas and sent them off to Janelle's team," director Emma Westenberg told COVER/LINE. "We created this world that became the music video." The world they created is very pink and very female, with allusions to female sexuality and the female body. The message is feminist, but it's also one of equality. As Monáe sings, "Deep inside, we're all just pink." Westenberg said she considers Monáe an activist ("She doesn't like to call herself that, but I think she is") and said she wanted to make a video that "captured her spirit." "It was really a joy to learn from her and collaborate with her," she said.

The music video for Jessie Reyez's "Gatekeeper," about an aspiring singer being pressured into having sex to advance her career by a producer, is based on a true story. Around 2012, a "big producer" propositioned and threatened Reyez, she told Billboard. "I was this close to selling my soul that night; I was this close to breaking." The song is written from the perspective of the producer with lines like "We are the gatekeepers / Spread your legs, open up," sung with dark, twisted vocal effects. The three-and-a-half minute video, showing Reyez riding in a vehicle with the producer, is cut from a longer extended film about the night. "Everything that's in there happened," she said.

Named for the phone number of the National Suicide Prevention Lifeline, "1-800" was the first top ten hit by Gaithersburg, Maryland's own Logic. Director Andy Hines told COVER/LINE Logic reached out about making a video about "a young black male who is confused or figuring himself out about his sexuality in high school" and from there, he wrote the story. In it, the high schooler gets caught with a boy, is bullied for being gay, and contemplates suicide. Hines called the shoot "taxing," because his wife had just given birth three days earlier. "It was a very interesting experience for me just in terms of empathy and my general point of view," he said. "It was an emotionally charged experience, for sure." Hines hopes people will get something out of the video regardless of their background. "It's for the kids in the story, it's for the bully. There's a lot of different perspective, people can watch that video a lot of different ways," he said.