RNC convention likely to be crazy outside, oddly quiet inside 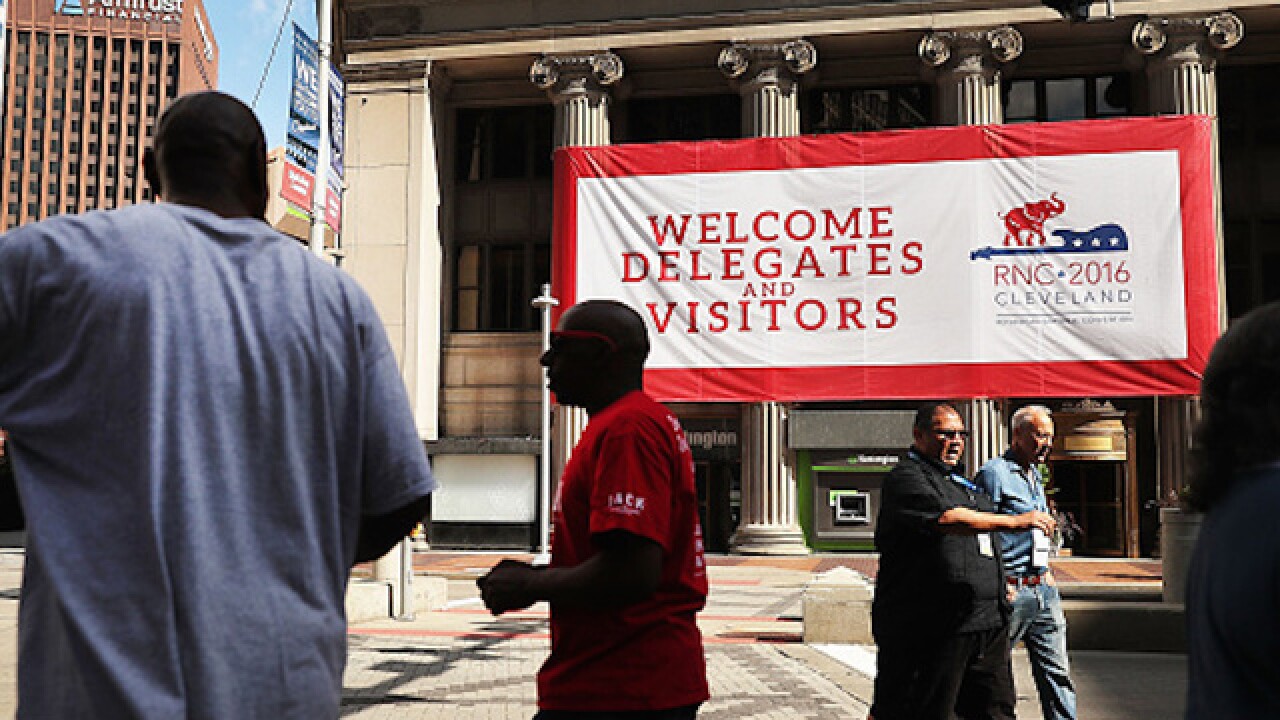 Copyright Getty Images
Spencer Platt
<p>CLEVELAND, OH - JULY 17: People walk through downtown Cleveland on July 17, 2016 in Cleveland, Ohio. An estimated 50,000 people are expected in Cleveland, including hundreds of protesters and members of the media. The four-day Republican National Convention kicks off on July 18. (Photo by Spencer Platt/Getty Images)</p>

Thousands of people will descend on Cleveland this week for what could be the one of the oddest Republican National Conventions ever.

Cleveland is preparing to welcome as many as 50,000 people with an additional 5,000 members of law enforcement to keep watch. While the streets will likely be filled to capacity with people and activity, inside the convention itself it will likely be a different kind of uncomfortable -- and a lot quieter.

Among the 50,000 will be demonstrators from pro and anti-Trump groups, some of whom may be armed with military-style weapons thanks to Ohio's open gun carry laws.

Story: What Happens At The Republican And Democratic Conventions

For four days, Quicken Loans Arena in downtown, the same stage that’s home to the newly minted NBA champions -- the Cleveland Cavaliers -- will be swapping out its wine and gold for red, white and blue. But unlike the sold-out NBA Finals, the RNC is having issues filling all of the open space.

A number of people have declined to speak RNC, including former Bronco’s quarterback Tim Tebow, Trump-opposed members of Congress and establishment Republicans who refuse to attend. Recently leaked financial struggles are leaving many to wonder what kind of spectacle the convention will really be.

“It’s going to be the most epic s--- show in American politics,” said Rick Wilson, a Republican strategist and media consultant who has been to every convention “without fail” since 1988. “Think about what’s going to happen in the next couple days. The RNC is going to be filled with professional wrestlers, former boxers and actors.”

The speaker list released by the RNC Friday included names such as Arkansas Sen. Tom Cotton, Dr. Ben Carson and Iowa Sen. Joni Ernst--who is expected to get a primetime speaking position. It also includes the names of every one of Trump’s family members, sans his 10-year-old son. GOP delegate runner-up Sen. Ted Cruz is also expected to speak, but the list is more notable for who isn’t on it. Out of the 62 listed speakers, only 13 are current senators or representatives.

There’s no mention of South Carolina Gov. Nikki Haley, who this year gave the Republican response to the State of the Union. Absent is South Carolina Rep. Trey Gowdy, who is the chairman of the Benghazi Committee--the group committed to investigating Trump’s Democratic competitor Hillary Clinton. He’ll be avoiding the city entirely.

Other well-known Republicans who won’t even be in Cleveland include Florida Sen. Marco Rubio and Arizona Sen. John McCain; both say they are too busy running their reelection campaigns. Ohio Sen. Rob Portman and Gov. John Kasich will be in the city, but avoiding the arena.

Related: Women Pose Nude To Send A Message To The Republican Convention

But those aren’t the only weird things happening at this year’s RNC, an event typically known just as much for raising money and drinking as it is for rolling out up-and-coming party members and electing a presidential nominee:

Here are some of the others:

--As of Sunday morning, a day before the convention begins, no final schedule has yet been released.

-- Ohio’s delegation is receiving a clear snub in terms of seating. They are not in the front this year, the typical placement reserved for a convention host state. Instead, their spots on the convention floor sit behind Pennsylvania and to the right of the main stage. Delegates from California and New York get the prime viewing spot.

--A rag-tag group of anti-Trumpers tried a last minute coup of sorts to unbound delegates to vote for the Republican that best fits their “conscience.” But after a week of grandstanding about the movement’s political support, the last ditch effort failed, as Trump gloated that he had “crushed” their revolt.

--- There are fewer corporate sponsors this year, largely because a dozen have  pulled out  after responding to external pressure. Coca-Cola was one of the largest sponsors to withdraw its support after responding to pressure from protest group Color of Change. Adding to the pressure, 100 executives from tech companies wrote an  open letter  against Donald Trump’s nomination last Thursday.

--After saying that it had 90 percent of the funding needed for the convention, the RNC did an about face Thursday and admitted it still needed financial help, resorting to asking Republican casino magnate Sheldon Adelson to help fill the $8.1 million deficit.

While the inner-workings of the convention will likely continue to be eyebrow raisers, it’s more likely that all eyes will be on what’s happening outside the convention: The protests.

Reporters are seeking approval to carry gas masks, despite a ban in Downtown Cleveland. Protest groups who have gotten legal permits to march and organize outside the convention center include Stand Together Against Trump, Food Not Bombs and the Westboro Baptist Church. There also has been speculation that groups  such as the Traditionalist Worker Party and the Black Panthers will be there. And don’t forget that Ohio is an open-carry state, so protesters can bring their own guns.

“It hasn’t been since 1936 that the city has seen this kind of attention of national news,” said Brian Kazy, a Cleveland City Council member who is in charge of safety for the city. “We’re trained and were planning for the worst and hoping obviously for the best.”

In preparation, the city more than doubled its available police force from 1,200 to almost 5,000. That number includes personnel from the Secret Service and FBI. Officers have been training for the convention for between six to nine months. Additionally, the city has invested in 300 additional bicycles and is bringing in police on horseback for crowd control.

But it’s not just protesters that are on the minds of city council members and police officers alike. Following the sniper shootings that occurred in Dallas that targeted police two weeks ago, officers are concerned that incidents could occur.

“We went from the mentality of protecting one individual to now being on the lookout and the guard for up to 50,000 individuals because you have to have the mentality now that everyone who has a badge on could be a target as well,” said Kazy.

Planning the convention has not done much to paint a picture of a unified party. It may be one of the reasons for why so many established Republicans like Wilson are staying far, far away.

“It’s going to be this ‘build the wall, we’re going to round them up’ dialog, and outside there will be Black Lives Matter people scrapping with Bikers for Trump and it will be 1968 all over,” said Wilson, who instead of attending the RNC will be at his summer home in North Carolina. “Hillary (Clinton) is going to come out and it’s going to be Democratic Party unity, she’s going to pretend to be steady and calm and centrist.”