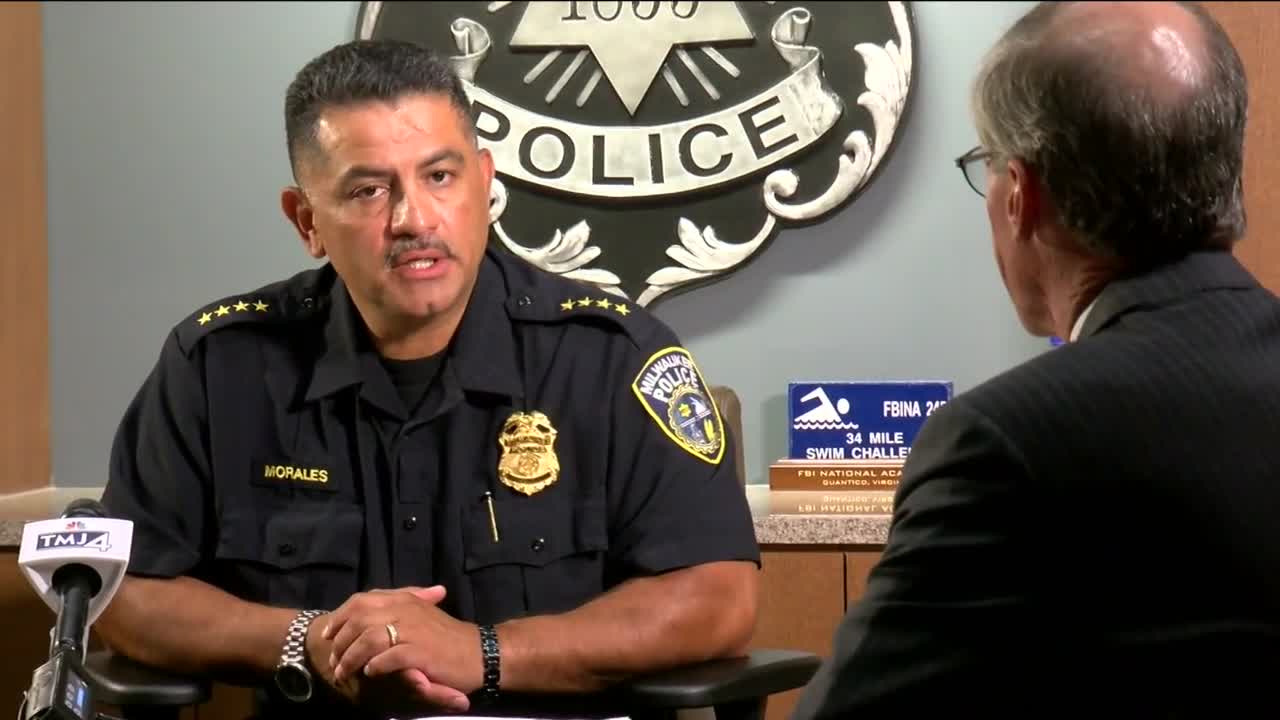 Milwaukee's police chief, Alfonso Morales, discusses the directives given to him by the Fire and Police Commission.

MILWAUKEE — Milwaukee Police Chief Alfonso Morales is defending his job and his department as he comes under increased scrutiny from the Milwaukee Fire and Police Commission.

Charles Benson spoke with Chief Morales about how he's responding to the long list of directives.

Chief Morales: I have a response to that, but I'm going to let my attorney Frank Gimbel answer that.

You can watch the full interview between Charles Benson, Alfonso Morales, and Frank Gimbel here:

Gimbel said Morales has been working with the commission on a number of requests and will continue to do so.

"That will reveal that the allegations of what it appears to be as an accusation is... inaccurate," said Gimbel. "And he has always been responsive to the extent they have sought information and cooperation."

Benson: Is there any reason you wouldn't want to answer that question directly?

Chief Morales: In the climate that we're in, with law enforcement across the country, we are becoming the scapegoat.

The chief is facing scrutiny for a number of high profile cases from the Milwaukee Bucks Sterling Brown arrest that lead to a $400,000 settlement offer and officers being disciplined, to the department's use of crowd munitions during the George Floyd protests.

Benson: Do you think the FPC wants more oversight on how you discipline your officers and if you're being tough enough when they do something wrong?

Chief Morales: I would say that's a fair comment.

Benson: And do you think that's agreeable?

Chief Morales: Part of my duties as chief of police is to identify my discipline process and have that discipline.

But Gimbel sees the Commission requests as more of an overreach than an oversight.

"I have a serious problem with the FPC acting as the agent or person or entity on the street making disciplinary decisions," said Gimbel, they shouldn't be there. That's the appeal's court."

Chief Morales has been also been asked to respond to the use of force during protests this summer - specifically what happened at 6th and McKinley in early June.

Benson: Has there been a lack of cooperation?

An underlining theme in all of the directives is trust and transparency.

"We have done a lot in the department to show transparency," said Morales. As far as me personally, I think sometimes we can be too honest with the public.

Chief Morales: Things that are asked, like you asked about our transparency. We are very transparent. We don't hold back on items.
Morales says the department has been transparent about suspended officer Michael Mattioli who has been charged in the off duty death of Joel Acevedo - but the family is asking for the 911 call and body cam video.

It's not one of the directives but Morales' attorney said failing to respond to all the other directives could cost the Chief his job.

Benson: Is the FPC trying to hold you accountable for things you should be doing as a chief? Do you think that's what the directives are about?

Atty. Gimbel: I have serious reservations about the protocol that has been pursued by FPC in this matter. In giving to the chief directives with an admission that failure to abide could lead to your firing or other lesser disciplinary actions.

The Chief said he has been and will continue to respond to requests from commissioners.

Benson: You were born and raised in Milwaukee. You've spent your entire adult life with the police department, and now you're the police chief. Is this the job you want?

Chief Morales: This is the job the leadership in Milwaukee put me in. And that's one thing that does not change with me.

"This is my calling," said Morales, "and I feel my obligation to give back to the community and the people who put me here."

The commission has given the Chief until August 6th to turn over most of the requested information. The Chief and his attorney have asked for an extension until late August.