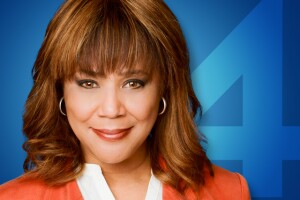 Meekins began her television career as the co-host of "God's Musical World" on KTVI in St. Louis. It was a perfect entry into the television word since Meekins is a former music teacher. Carole's first television news job was at KPLR-TV in St. Louis . She also worked at WAKA-TV (CBS) in Montgomery, Alabama, WRIC-TV(NBC) in Richmond, Virginia, and WEWS-TV(ABC) in Cleveland, Ohio.

Carole believes in lifting others. Her calendar is always full with speaking engagements and emcee events throughout the Greater Milwaukee Area. Her weekly "Positively Milwaukee" reports celebrate good news and inspirational stories of people, places, and events throughout southeast Wisconsin.She explains, "It is our obligation to remind people the world is filled with ordinary people doing extraordinary things. We an elevate our world elevating those who serve others.

Meekins founded and funds the "Carole Meekins Scholarship Fund" for aspiring TV or print journalists. Each year a deserving student receives $2,500.00 toward college tuition costs. The scholarship is given through the Wisconsin Black Media Association.

Meekins shares, "All adults should make it a mission to help lift young people and discover untapped potential. It's our duty and obligation for the next generation."

Meekins received an Award of Excellence from the Wisconsin Black Media Association, the local chapter of the National Association of Black Journalists. She's co-anchored Emmy-Award winning newscasts and co-anchored a newscast that earned an Edward R. Murrow Award for breaking news.

Meekins was touched to be selected to carry the Olympic Torch in conjunction with NBC's coverage of the 2000 Olympics during her tenure at TODAY'S TMJ4. She has also served as honorary chairwoman of the AIDS Walk Wisconsin, and the Susan G. Komen Breast Cancer Walk for a Cure, and has helped raise money to fight childhood cancer for the MACC Fund, Midwest Athletes against Childhood Cancer. Carole also served as keynote speaker for graduation ceremonies at Alverno College.

When not at work Carole enjoys music, reading, and working out. She also loves to cook, and and is always looking for healthy gluten free recipes. When she is not at work, Carole and her husband love to take long walks along Lake Michigan and quick weekend trips around the state to take in the scenic beauty of Wisconsin.