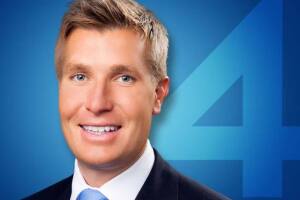 He was born in Green Bay and grew up in Fond du Lac and Oshkosh. He vividly remembers the famed "Snow Bowl" in Green Bay when the Packers were playing the poor Buccaneers in 20" of snow: "Fans rode their snowmobiles to the stadium and people were sliding down the steps of Lambeau. It was awesome."

After a brief love affair with aviation in college, Brian transferred to the University of Oklahoma, one of the best severe storm schools, where he chased tornadoes and focused on severe weather. He graduated with a Bachelor of Science degree in Geosciences in 1996 and received his American Meteorological Society Seal of Approval in 1997. Brian has also been awarded the prestigious status of "Certified Broadcast Meteorologist" from the American Meteorological Society.

During his senior year in college, Brian landed his first job at KSWO in Lawton, Oklahoma. After graduation, Brian moved back home to Wisconsin to work for WAOW in Wausau -- and after only a year, he was offered a great job at WJXT in Jacksonville, Florida. During his five-year stay in Jacksonville, he covered lots of severe weather and numerous tropical storms and hurricanes, including two weeks of Hurricane Floyd in 1999.

Before coming to TODAY'S TMJ4, Brian spent four years at WCCO in Minneapolis doing the morning show. "The people were great to me despite being a diehard Packer fan," he says.

He spends his free time with his wife Tina, daughter Alexis, "Ali," who was born on July 29, 2005, and son Austin, who was born on September 22, 2010. "My girls and my boy are my life! There is nothing more important to me," he says. "I always wanted a little girl after seeing the movie "Father of the Bride," and Ali is a dream daughter…she loves the girlie things, yet also loves sports and working in the yard with her dad. She is in love with Bernie Brewer and can’t wait to introduce Austin to Bernie. Miller Park has been “Bernie’s House” to Ali since we moved here. Austin has made our great life, perfect! He is amazing and I can’t get enough of my boy! He is so happy and always smiling and he adores his big sister! They are so cute together and I am enjoying every moment because soon he will be getting into her things and the fighting will begin! Being a dad is better than I ever imagined and I am blessed with the two cutest and sweetest kids ever. As you can see, I am a very proud dad."

Brian's hobbies include watching, chasing and photographing weather; golf; travel; biking; basketball; bowling (should have been a professional..kidding); jet-skiing; snow-skiing; and going to every Green Bay Packers home game. "I am a season ticket holder and love my Packers," Brian exclaims. "There is nothing like going to Lambeau Field and tailgating for hours before the game. I can’t wait to take Ali and Austin"

Brian is very happy to be at TMJ4 and in Milwaukee: "I spent a lot of time in Milwaukee and watching TMJ4 as a kid. It's home. I love Summerfest, the Bucks, and the Brewers, and I was at the last games in County Stadium and still remember crying as I watched John Tudor beat the Brewers in Game 7 of the 1982 World Series (I was 10)."

Brian is also a graduate student at the University of Minnesota where he is working on a Ph.D. in Climatology. He is researching the changes in thunderstorm and tornado frequency in Minnesota and Wisconsin. Brian hopes to get his findings published in weather and climate journals.